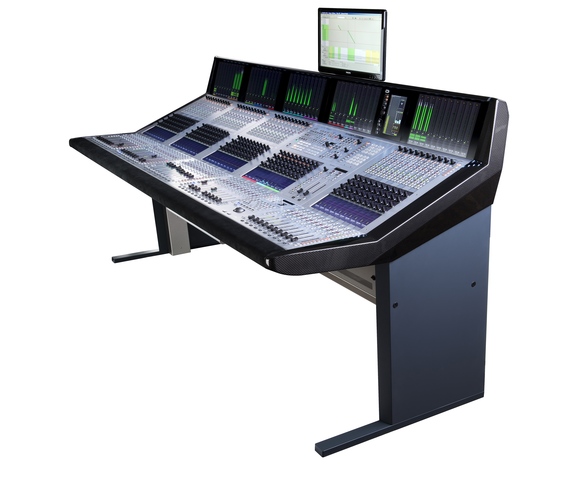 The new remote truck will be operational by the end of 2015 and will service the type of high-profile entertainment programs AMV excels in producing—their previous credits include the MTV Video Music Awards, the Tournament of Roses parade, the CMT Music Awards, the NCAA Final Four and a “who’s who” of corporate clients.

Ian Vysick, Audio Development Specialist at AMV, said, “We’ve had a very close relationship with Studer for a long time and their consoles have always performed as promised. From a sonic standpoint, I have yet to find a better-sounding digital console. They’re responsive and easy to use, our operators love them and in fact the people using the consoles ask for them specifically.” On many occasions customers have found and hired AMV because they learned that the company uses Studer consoles.

“This console has everything,” Vysick stated. The Vista X is AMV’s 10th Studer console, and Vysick notes that the company’s mixing engineers are very comfortable with Studer’s onboard dynamics processing and EQ and the way the consoles operate in general, making the step up to the Vista X a logical move. He also points out that because of the expanded internal processing the amount of onboard gear needed gets smaller every time AMV buys a new console – a distinct advantage in the cramped confines of a mobile truck. Because the system has the two Lexicon PCM96 reverb and effects processors integrated into the console, we only need a few pieces of outboard gear to complete what we believe is a really nice package.”

The new truck will provide connectivity for projects of all size and scale. “There’s a ton of MADI in this truck – 11 MADI cards with redundant streams to the video router and to the outside world, connection to multiple ProTools systems, and also a MADI card going straight into the RTS intercom and more,” Vysick noted.

For Vysick, another major advantage of the Vista X is its Dante connectivity. “We’ve integrated Dante into the vehicle alongside the MADI system, so the vehicle is already ahead of the game and will be ready for all future developments.”

All of AMV’s remote trucks are outfitted with Studer Remote Stagebox units and the new vehicle will be equipped with three Remote Stageboxes, all of which will be linked to the Vista X console. “Fiber is now so reliable that the fears in using it have gone away,” Vysick pointed out. “Now we can have everything in house and it’s the cleanest signal possible to the vehicle.”

One of the Stageboxes is equipped with a Dante card. “An advantage of this is I’ll be able to work alongside other vendors in adopting Dante,” Vysick added. “I can talk to PA vendors and intercom vendors and let them know that now that I have a Dante stream inside the venue, they can take my Dante setup and use it as a further tool to integrate the vehicle into the overall system.”

“With the incorporation of Dante, this truck with the Studer Vista X is state-of-the-art and will be ahead the game for years to come,” Vysick concluded.