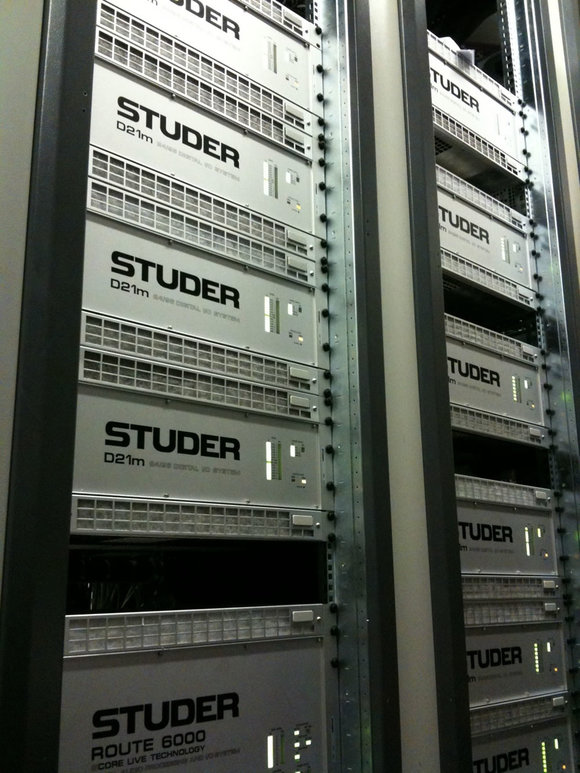 The network’s channel requirements are substantial because, since Arte is an international joint venture, programs cater technically for audiences from both countries. This requires double titling, opposite language subtitling or dubbing, with hosts speaking both languages alternately and generally two separate stereo feeds (available through DVB-T, satellite television and digital cable).

Arte began transmission in 1992 as a multi cultural European channel and is now broadcasting 24/7 to France, Germany and the rest of Europe.  Audiopole’s Jean-Philippe Blanchard has supported the station’s news and production studios with product since the sale of two Studer Vista 6 consoles a couple of years ago.

When Arte decided 12 months ago to launch a tender to renew the technical infrastructure, including video and HD, one of the decisions they needed to make was whether to retain the two Vista 6’s.

After deliberation, they opted to keep the desks, using the Studer RELINK Resource Linking I/O Sharing facility, and replace their small AES router with a much larger Studer matrix, to increase workflow in the tapeless HD environment.

The tender was won by Luxembourg-based Broadcasting Center Europe (BCE) the engineering division of the parent CLT Group.

Since the network wanted to be able to work with a 16-channel 3G-SDI card. Audiopole included these cards in the router package and quoted console upgrades to add 5.1 channels features.

SDI audio embedding and de-embedding has been an integral part of Studer consoles for several years, and the company added a high-bandwidth version of SDI to its optional D21m I/O module with the recent release of the 3G SDI card. The new option can handle up to 16 audio channels in an SDI stream, acting as an eight- or 16-channel embedder, an eight- or 16-channel de-embedder, or any combination thereof.

The new card interfaces with all SDI standards from SD, HD to 3G, with on-board sample-rate converters providing a method for the audio streams to be processed independently of the SDI video sync. The card directly injects the de-embedded audio into the console bus structure, removing the D/A converter- or AES3 Interface stage, which would be required with standalone SDI equipment.

Blanchard confirms the new system uses 52 of the 3G-SDI cards in a routing matrix of around 1600 x 1600 inputs and outputs.

“Having an integral card means less weight, less rack space, and less cost, since these option cards fit into the existing D21m I/O system racks,” he says. “The network is delighted with the economy.”

With the requirement for multi language and stereo environments — for both the French and German broadcasts — the fit-out had been quite complex. “It had required us to spend a lot of time on site — but we have delivered a substantial Studer routing system,” says the Audiopole’s Broadcast Division Director. “Arte can now have access to all the broadcast facilities and share the microphones using RELINK.”