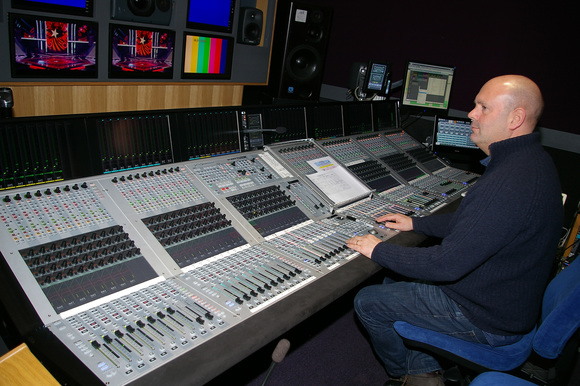 ELSTREE, United Kingdom – The ever-increasing production challenges (and I/O requirements) of popular prime-time entertainment shows such as Strictly Come Dancing have led to a re-evaluation of the audio mixing architecture. As a result, BBC Studios and Post Production has replaced the HARMAN Studer Vista 8 at the George Lucas stages at Elstree with a new Vista X.

The new fully redundant setup offers sound supervisors a vast increase in I/O capacity (and processing). At the heart of the system is the new Infinity Core, with 12 high capacity/high speed A-Link audio interfaces that provide more than 5,000 inputs and outputs and more than 800 audio DSP channels.

But this is only the beginning. The embedded VistaMix — the automated microphone mixing for unscripted shows — and the fact that A-Link is being adopted by other manufacturers and offers incredible possibilities for audio distribution, routing and expansion provide huge benefits.

For BBC Studios and Post Production’s Sound Supervisor, Andy Tapley, who is responsible for the sound infrastructure at the company’s studios, the commissioning of the new Studer Vista X extends the studios’ long relationship with the manufacturer, after specifying the first Vista 8 for TC1 at BBC Television Centre a decade ago.

“I always look forward to introducing new technology,” he says. “We moved four Vista 8s to Elstree when we relocated from Television Centre in 2013 and at the same time revamped four of the stages, upgrading the desks to go further down the MADI route. But there comes a point where it becomes difficult to keep upgrading existing desks as production requirements change and grow.

“As a provider of premium studio space, we have a commitment to provide our clients with all the benefits of new technology.”

The new Vista X, which Tapley started mapping and populating in February this year in preparation for its debut on The People’s Strictly for Comic Relief, has provided BBC Studios and Post Production with an elegant solution. It is accompanied by four high-density D23m frames which break out the A-Link fibre connections to standard analogue, digital and video interfaces. “The fact that the new frames are backwards compatible with the D21 cards meant we could use all our existing I/O hardware”, he notes.

The advantages of the new Vista X are manifold, and comfortably meet the heavy demands placed on it by productions.

“Our investment in the Studer Vista X desk has further strengthened our gallery offering and enables us to streamline the delivery of studio audio, ensuring the requirements of a complex audio set-up like The People’s Strictly for Comic Relief are met without compromise. We’re delivering a high track count within a short space of time for each dance, and we have the flexibility to rearrange a mix to meet any last minute changes.”

To exemplify, this production is running 160 mono and 60 stereo channels on Strictly Come Dancing in addition to surround stems. And, of course, VistaMix is a vital component, “This is a proven system,” notes Tapley, “and one we have been using for over two years — it works extremely well. When you don’t know who is going to speak, it auto mixes in an intelligent way and you don’t hear any transition. And with 15 couples on radio mics cascading so that 30 radio mics are live at the same time, with all the ambient noise, that’s no mean feat. It’s well thought out and easily integrates into the desk.”

Tapley also comments on Studer’s new design philosophy — particularly moving the DSP from SHARC to Intel CPUs. “In doing so, Studer has isolated a number of the Intel cores purely for audio processing. There’s considerably more power and expandability and it allows you to build the desk you want with the incorporated Config tool.”

As for redundancy, thanks to Studer’s Quad Star technology two completely independent DSP cores run in parallel to achieve ‘instant’ change over.

In practice, anyone who is used to working a Vista can operate this desk’’ believes Tapley. “Aside from the ergonomics the new meter bridge provides more information and a ‘history display’ shows the last 50 seconds of waveform audio for each fader!”

Finally there is FaderGlow, about which he says, “In the heat of a live show you cannot underestimate the importance of a colour reference on the desk to direct your hand to the right fader.”

Run in tandem with the studio’s existing Studer OnAir 3000 console, which serves as a grams desk, studio router and much more, they now have an even stronger set up to carry them into the future.

The original installation was jointly carried out by IPE, who were responsible for the technical fit-out, and Custom Consoles, who provided the furniture.