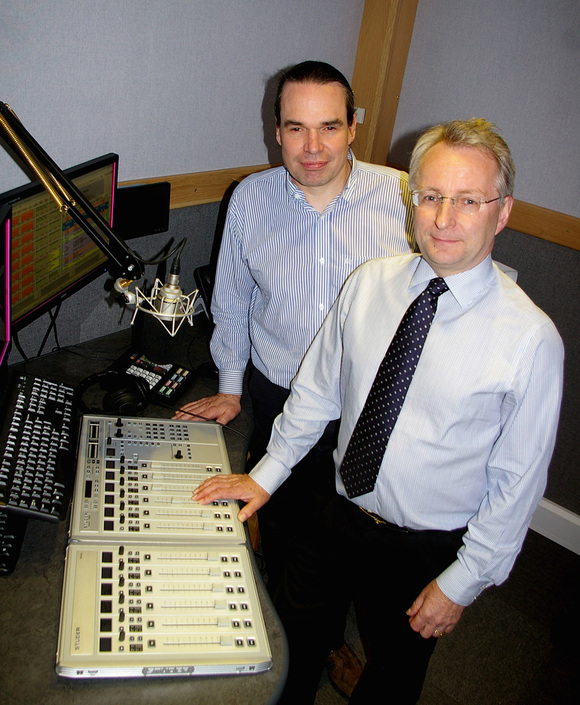 The first order for seven of these 12 channel/12-fader desks was confirmed by Quentin Howard, SSCV Director of Television & Technology, with consoles destined for the UK, followed by Germany and Gibraltar.

At the heart of the BFBS Radio operation are three core music and speech radio networks heard in over 23 countries worldwide via 70 FM transmitters, via satellite reception and internet streaming. These are supplemented by a network of local BFBS stations in eight overseas locations and a further ten community radio stations on UK military bases, where many of the OnAir 1500s are destined.

The Corporation’s TV and Radio services are multiplexed and uplinked from Chalfont to four DVB-S2 satellites covering 16 time zones, that are either received direct or rebroadcast through TV and radio distribution technology.

According to Howard, a former commercial radio CTO and DAB executive, his goal for BFBS was to create a cutting edge broadcast infrastructure by moving to IP based production platforms. Having arrived at SSVC four years ago, Howard and his executive team won an MOD contract to deliver the armed forces radio and TV services. “The capex enabled us to refresh the studios as our radio facilities were way behind the curve.  We now have a leading global network of digital studios and can broadcast from anywhere to anywhere, responding to fast-changing military and civil situations by making use of the latest desk-top and field production tools.”

The IP route was his preferred option. “Up to now, we’ve relied on ISDN links and fixed X-21 circuits which are getting harder to support as ISDN is withdrawn.  AOIP was the obvious answer and by creating what is effectively a big AOIP cloud around the world, accessible at each location, we have the ultimate in flexibility and have achieved what we set out to do.”

Unhappy with manufacturing quality and support of an earlier IP mixing desk solution for their community stations, SSVC searched for alternatives and met Studer at the IBC Show in Amsterdam last September. Quentin Howard’s team, including broadcast engineers Jonathan Blacknell and Martin Bowd, and regional general manager Nick Beer, had already conducted their own research, and Howard’s senior project manager had been heavily involved in the Studer installations at the BBC’s New Broadcasting House in London and MediaCityUK, Salford studios.

“We liked the design of the Studer OnAir 1500 kit — it’s compact, offers a lot of functionality in a minimum footprint, is extremely flexible and durable and everything plugs in with a single RJ45.  Another pleasing aspect is the surprisingly competitively price, but also that Studer’s manufacturing and support centre is only half an hour away, and that’s a big comfort factor.”

SSVC was also seeking ultra-reliability and a quick delivery, both requirements which the manufacturer was able to deliver. “Studer is a well-known brand with a famous reputation for quality and durability.  The entire Studer range of on-air desks shares the same software and that’s an important feature which ensures all Studer customers, regardless of size, get the same feature upgrades and service.”

Complete with Studer NANO SCore DSP the On Air 1500s provide flexible capacity for analogue and AES audio ins and outs, and a generous number of GPIOs. Another key factor was Studer’s compatibility with SSVC’s extensive Livewire AOIP core.

The first six OnAir 1500 consoles have been deployed on military bases at two studios in Shorncliffe (Folkestone) for BFBS Gurkha Radio, two in Germany and two in Gibraltar. “We hope this will rise to 12-15 over the next year or so as we complete our worldwide studio refurbishment programme,” confirmed Howard.

The desks are linked together in pairs for simple I/O sharing via Studer RELINK, and are easily switchable from studio to air without the need for a central switching matrix.

In summary, Quentin Howard stated, “This is the first time SSVC has adopted Studer mixers and by introducing these new tools, and copying across a standard configuration we are ensuring that no-one has to relearn the desk.

“The Studer platform is proving popular with our presenters, who like its sleek profile and ergonomics.  As a former radio presenter myself, I know what a difference this can make to your show.   We liked the ability to store desk snapshots which makes recalling a configuration better suited to a voice tracking session very easy.   Also important in a desk is the option to lock down features like EQ or channel compression which can get in the way, especially in the hands of less experienced presenters.”