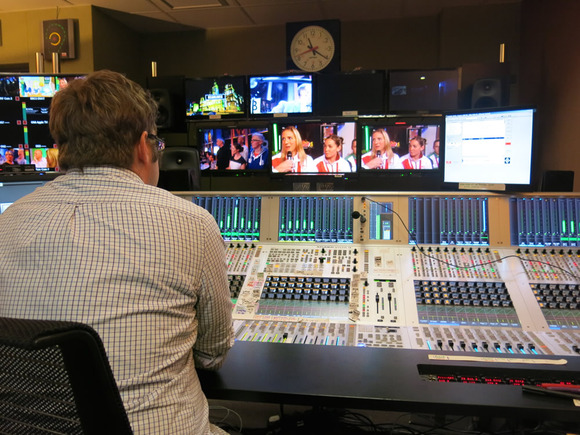 GLASGOW, United Kingdom – In the largest multi-sport event ever held in Glasgow, Scotland, the 2014 Commonwealth Games brought together athletes from 71 nations and territories competing in 18 different sports. The Games took place in multiple venues throughout Glasgow; Dega Broadcast Systems of Basingstoke, UK, was contracted by the BBC to provide the additional technical facilities required to cover the events. Highlighting Dega’s broadcast equipment were multiple HARMAN Studer Vista digital audio consoles.

Among the equipment Dega provided was a 52-fader Vista 9 digital console, which was used for BBC Three’s coverage of the games. The Vista 9 was also used in the evenings for an entertainment highlights show on BBC One called “Tonight at the Games.” Dega also supplied a Vista 1 console to equalize and balance all the incoming commentaries.

In addition, Dega used a Studer Route 6000 routing and signal processing system, which was connected to the Vista 9 and Vista 1, as well as a Riedel MediorNet system. The Route 6000 was used to route commentary and coordinate circuits between feeds and venues under the control of BNCS software.

“We have a good relationship with Studer and have used their equipment successfully in the past,” said John Cleaver of Dega Broadcast Systems. “The Studer consoles performed extremely well during the Commonwealth Games.”

The Studer Route 6000 system can accommodate up to 1728 x 1728 inputs and outputs. The main DSP Core is highly suited to space-conscious installations. Equipped with an internal D21m I/O system with up to 192 inputs and outputs, it takes up only 6U of rack space, while multiple cores are simply interconnected using CAT5 tie lines.

“The Vista 9 proved a great platform for both the daytime sports coverage and the evening entertainment show,” said Richard Sillitto, audio engineer at the Commonwealth Games. “The VistaMix and snapshot capabilities are great tools for the ‘of the moment’ nature of sports coverage, mixed with the demands of an LE show.”