End Of An On-Air Era For Pioneering Studer Consoles 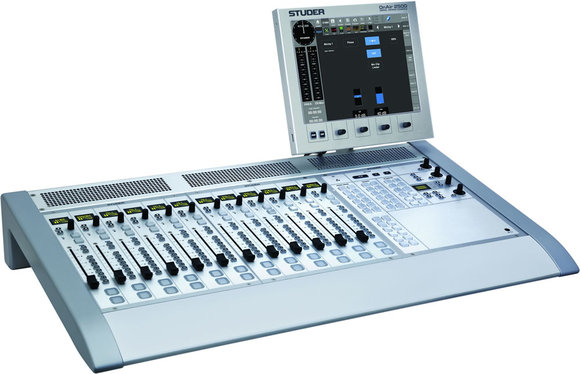 Studer and more than 2000 broadcasting operations around the world bid a fond farewell to the extraordinarily successful OnAir 1000 and 2000 digital mixing consoles, as the last one leaves the Regensdorf factory after more than 10 years in production, largely because of electrical components being unavailable in ROHS compliant versions.

The OnAir 2000 was introduced in 1997, although, in the annals of company history, it was overshadowed by the launch of the D-950 in the same year. A young commercial station Radio BE1 in Berne, Switzerland, purchased the first two desks to roll off the production line. Nearly ten years later, BE1 was to replace the consoles……with new OnAir 2000s!

The outstanding reliability of the OnAir 2000 set standards; its robust design and operational stability made it a workhorse in radio broadcast facilities around the world, from CBC in Canada to the Voice of Vietnam, from Radio Romania to the Namibian Broadcasting Corporation. The OnAir 2000 was and still is the reference broadcast console in markets which placed high priority on availability and maintainability.

Derived from the well-established OnAir 2000 technology, the OnAir 1000 delivered the same attributes to the broadcast market for small to mid-size radio installations. Launched in 2000, its cost-effective integrated design suited nearly 1000 radio studios.

The intuitive user-interface of the OnAir 2000 was also the first glimpse of the “Touch’n’Action” philosophy currently used on the OnAir 3000 series, and the new-to-market OnAir 2500, a totally self-contained system which builds upon the operational concepts of its successful predecessors.

The OnAir 2500 made its debut at NAB 2008. Studer’s new digital all-in-one on-air console for radio applications utilises the well-established software technology derived from the highly acclaimed OnAir 3000 to deliver a new standard in ease-of-use.

The Studer OnAir 2500 is a totally self-contained system, with control surface, I/O breakout, DSP Core and power supply all integrated within a single compact chassis. It is available in three standard configurations with 12, 18 and 24 faders are available; motorised channel faders available as an option.