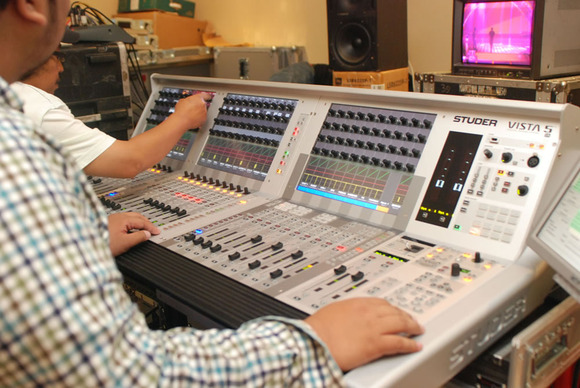 SOUTH JAKARTA, Indonesia — Headquartered in South Jarkarta, SCTV (Surya Citra Televisi) is one of Indonesia’s largest TV stations and offers a wide variety of programming, including its annual SCTV Awards telecast. For the 2011 SCTV Awards, the station contracted Melodia Rental of Surabaya, Indonesia to provide the audio system, including a HARMAN Studer Vista 5 SR digital mixing system as the live sound front-of-house console.

Melodia owner Rudy Winarto’s recently purchased the Vista 5 SR. “[Winarto] wanted to take his rental business to a higher level and looked at the Vista 5 because of Studer’s reputation and its acceptance as an industry standard in broadcast and live sound production,” said Yee Tat Nam of HARMAN.

SCTV has used Studer consoles for previous awards shows and has been happy with their performance. “When the producers found out that Melodia Rental had just obtained a Studer Vista 5 SR, they were eager to see how it would perform,” Nam added.

Dien Anugrah was the audio engineer for the awards telecast and he commented that the Vista 5 SR provided a major step forward. “I fell in love with the Vista 5 after using it for just one day,” Anugrah noted. “Its sound quality is outstanding–it’s so warm and clean. The mic preamps are especially well suited for live broadcast.”

“I found the console interface to be extremely user friendly,” Anugrah added. “The Vista 5’s control layout enabled me to operate the console for the 2011 SCTV awards with almost no learning curve.”

“I look forward to using the Vista 5 again in upcoming events,” concluded Anugrah. “It really is designed with people like me in mind, who need a great sounding, reliable console they can depend on day in and day out.”