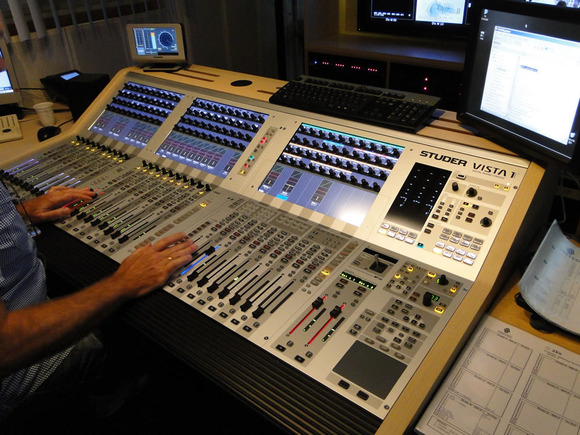 AMSTERDAM, The Netherlands – Hilversum-based broadcast facilities provider AKN has upgraded its technical facilities, by moving onto HARMAN’s Studer Vista digital platform. After more than 15 years’ service, it has decommissioned its faithful Studer 928 analogue console in favour of a new all-in-one Vista 1. This was supplied by Studer’s Dutch distributor, Heynen.

The desk will be used for mixing broadcast productions — live and on record — and operate between both of its large, well equipped A and B TV studios. Many well know public television shows are broadcast from these studios — including major children’s shows and serious political and religious debates.

Set up in the mid-90’s to support broadcasters AKN rents out its facility in the Dutch media capital to a number of organisations and is responsible for maintaining these studios at the highest technical level.

Patrick van der Tol, AKN general manager Radio & TV Studios, and Damir Cicek, AKN floor manager, stressed the necessity to ensure a stable technical infrastructure for AKN’s clients. “The choice for a digital platform was obvious since we need to be keep up with ongoing changes in audio workflow,” they rationalized.

The continued adoption of Studer resulted from their collaboration with technical support company United Facilities who provide audio and video production teams. Says Cicek, “In their own OBV’s they have installed Vista 5 and Vista 8 consoles and so employees are familiar with the operational characteristics and capabilities they provide.

“While a Vista platform was a clear choice, the Vista 5 and 8 were considered to be too large for the productions we are producing — however the Vista 1 is a smaller, multifunctional desk — excellent for the job and financially attractive.”

The Vista platform was also evaluated against products from other manufacturers before the decision was made — and the company DBSE, who had assisted in the planning and development stages, also oversaw the console installation. “We have a lot of different productions, all with completely different audio setups and desires,” says van der Tol. “These productions are planned tightly, one after another. The option to save audio settings into the console we knew would give us a time advantage, as we don’t need to build up our desk structure ‘from scratch’ every time.”

Summing up, Patrick van der Tol says, “The purchase of the Vista 1 is a major step up for us — and our studio engineers. Digital audio mixing is providing them with new methods to enable them to take our productions to the next level.”