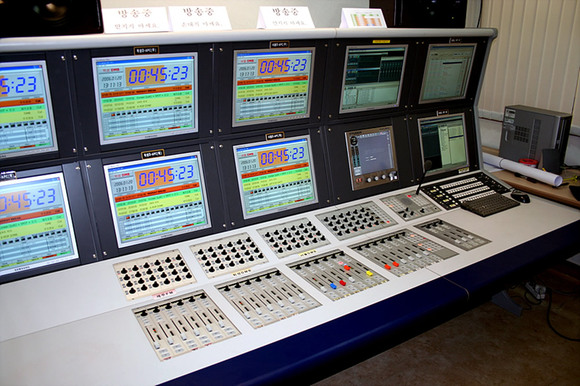 Arirang is "the world's window into Korea", Korea's first, domestically-produced, English-language TV and radio channel.   Since debuting in 1997, the Arirang network has expanded into every continent, and is viewed in more than 50 million households in 180 countries.  The station has just commenced Digital Multimedia Broadcasting (DMB) of its radio channel throughout Korea.

Arirang has invested in one of the latest Studer digital models, the OnAir 3000, which is now being used in the radio master control room in its newly-built DMB centre in Seoul.

Most of the other Studer consoles are installed in the recently-opened radio station facility in Seoul.  Twelve desks are here, a combination of OnAir 500s, OnAir 1000s and OnAir 2000s, used for a variety of purposes in radio programme production and master control.  Additionally, an OnAir1000 and OnAir 2000 have been installed in Arirang's new broadcast station in Jeju Island, south of the mainland.

M.H. Seo at DYC Dong Yang Trading Co., Studer's representative in South Korea, points out that Arirang has been using Studer consoles successfully for several years.  "The Arirang team looked for the same qualities of reliability and strong support from the manufacturer that they've found when they bought other Studer consoles.  The OnAir 3000 was chosen ahead of all the competition because of its easy operation (touch 'n' action) and its flexibility."