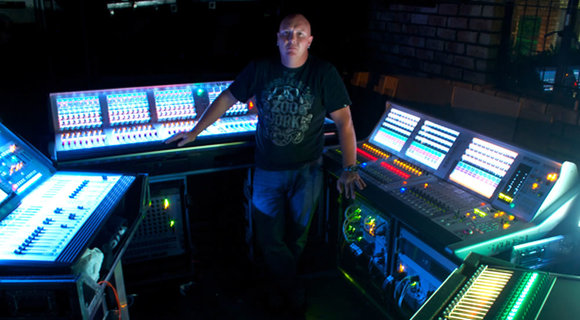 Marais’ CV boasts many accolades for which precision audio engineering excellence was a prerequisite, including “SA Idols”—and he has also been associated with the South African Music Awards (SAMA), the 2010 FIFA World Cup and other high-profile events. The Vista 5 SR solution had been proposed by Wild & Marr and debuted on a “Starlight Classics” show.

“When the Vista 5 SR first arrived in South Africa Wild & Marr immediately contacted me, knowing that the console would fit right in with the jobs I needed to do,” Marais said. “It was a no-brainer. After that I added the Vi1 and Si Compact 32 to my inventory.”

Soundcraft and Studer flagship consoles have supercharged Marius’ evolving large-scale productions. “An orchestra plays as one unit, so if you have a good microphone, preamp and PA system, you should not have to change the sound with lots of EQ. That’s what the Soundcraft and Studer consoles give me—warm uncoloured sound. The Vistonics™ on the Vista and the preamps are, in my opinion, what makes the console so unique.”

The sound engineer’s induction to the Soundcraft family took place way back, with the launch of the Spirit Live 4, when the Freestate Performing Arts Council bought one to use on a township outreach arts programme. When Marais joined audio rental company Sound Stylists in 1997, he worked on a Soundcraft SM12 (“still one of my favourite analogue consoles”) and later a Soundcraft Series 5 and Series 5M. “They were groundbreaking consoles, especially the 5M,” Marais remembered. “The one thing that has always stood out about the Soundcraft products for me was how easy they are to operate. They are quick, functional and very well laid out.”

Marius joined Matrix Sound in 2004, which became the first South African company to invest in a Soundcraft Vi6. “I fell in love with the Vi6 on the first gig,” he said. “The smooth, warm sounding preamps were what first drew my attention—the features are unparalleled. From there it was my desk of choice for all the shows that required a large format console.”

By 2009, Marais had formed his own company, Audio Logic, with Wild & Marr providing an Si3 which he used as a sidecar (alongside the Vi6) for big orchestra shows involving the giant Afrikaans music production, “Skouspel” (which translates to“Spectacular”). This included a 64-piece orchestra, a 6-piece rhythm section, a guest band of various sizes and huge numbers of vocalists.

“That was the main reason for acquiring the new Vista 5 SR,” said Marais. “With a correctly set-up PA, the desks sound just amazing. With a Vi6 as a sub mix for the orchestra, I used a total of 184 channels on the Studer. With the snapshot and cue function, even a large-scale production like this was not as difficult as it used to be. The open platform provides the perfect environment to design and execute any size production.”

Summing up, the Audio Logic man said he is delighted with the investments made in the Soundcraft and Studer platforms. “With the brilliant service I receive from Wild & Marr, I can only see a growing relationship. As far as my clients are concerned, they just want good audio, and with the right tools, half the job is done.”