Mix Minus Key To CNBC Europe Choice of Studer Vista 5 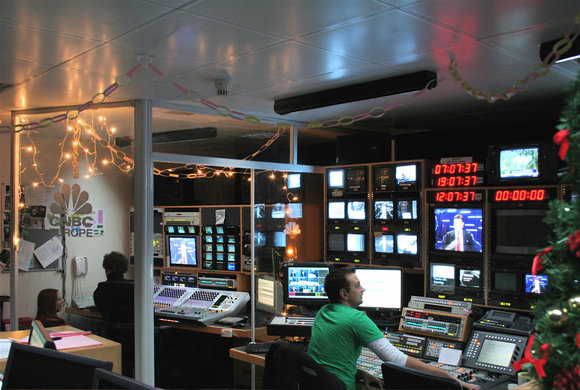 Europe’s leading business news TV channel CNBC Europe has commissioned a Studer Vista 5 digital audio console as part of a substantial refurbishment programme of its facilities in the City of London.

CNBC Europe uses two television studios for its daily live operations, which broadcast to the most influential figures in the European financial sector. Having taken the decision to upgrade its main audio facilities to a digital platform, CNBC Europe’s Head of Technology Neil Burt headed the search for a new console.

Burt was specifically looking for proper mix minus capability: “the quality of mix minus was our first criterion, anything else the console could do would be a bonus,” he says. “It’s the key plus point for a broadcast rather than a general production console, and on the Vista 5, it is clearly at the operator’s disposal.”

CNBC Europe has a huge requirement for clean feed working. Local programme production includes four, five, maybe six guests per show. A whole range of external sources from the CNBC satellite network bring news from the main financial markets all over Europe. The studio processes feeds to tower connecting with a number of cameras in banks and trading floors in London, and there are pipelines to the US and Asia to pick up feeds from those territories.

Critically, presenters of the CNBC programmes may be in different cities – New York, Singapore, and London - and their only opportunity to talk to each other is when they’re on air. Says Burt, “the ability for conversations to happen within the desk between transmissions is absolutely vital.”

The final decision to buy Studer was taken after a visit by CNBC’s key operators to London’s Royal Opera House, home to two Vista 5s and a Studer Vista 8. “We saw the ease of use, the flow of the desk using the Vistonics approach, and we could easily see how it correlates with what we’ve been used to,” explains Burt. “Our approach is that anybody should be able to use the desk; although we have three principal technical operators, they have many duties besides the audio mix. The Vista 5 was the only console that was user-friendly for everyone. Within two days of starting, people were already creating their own snapshots!”

The Vista 5 is installed in the production control room. “We had to consider the space requirements, which mitigated against an extended Vista 5 model; however, after three weeks’ operation, we have found unexpected spare capacity on the console!”

With Studer’s D21m high-density audio interface system installed in a separate machine room, CNBC Europe has the capability to control either of its two studios with the Vista 5 console. Says Burt, “whilst building work is taking place in the larger of the studios, production has migrated to the other, still using the Vista 5 for audio, and we’ve been impressed by how little hassle this has caused.”