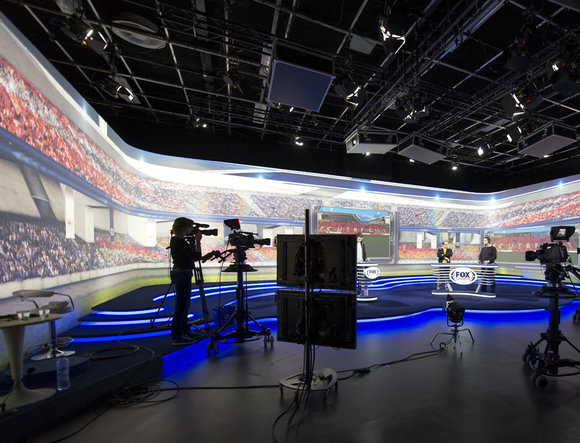 AMSTERDAM, The Netherlands –Situated at the MediArena in Amsterdam, the new Endemol Sport studios have been equipped with two 42-fader HARMAN Studer Vista 5 digital mixing consoles as part of an innovative production design, involving three studios and three galleries on the same fiber backbone.

The consoles were supplied by Heynen, Studer’s Dutch distributors, and installed by system integrator DutchView. These form the audio control of a sophisticated fit-out initiated by Eredivisie Media & Marketing to mark the start of the 2013-2014 Dutch football season. Three new HD studios and production galleries, dedicated to match-day programming and highlights, have been built and equipped for this purpose.

The project’s primary objectives were to improve both the quality of content contribution across multiple platforms and the overall experience for viewers tuning in to the Fox Sports Eredivisie football pay-TV channels.

Undertaking the conceptual design and specification was a team comprising Victor Winkelhage (head of production Endemol Sport), Jinne Tania (consultant Fox/Eredivisie) and SjaakVreeburg (Resources Manager Endemol). It was Vreeburg who produced the tender document, and later acted as project manager for the construction of the studios.

The aim was to achieve an innovative mix of cutting-edge studio technology and IP-based platforms, with direct access from, and full integration between, technology and editing using Riedel MediorNet media networking.

“We can now handle three different live programmes on three different channels, using one video/audio router for the three studios, one intercom system, Virtual studio manager and other software solutions,” said Vreeburg. “The workflow from EVS is directly streamed to the storage facility. We can start editing instantly on up to 12 sets for direct playback in the studio by IP-directory or file transfer to the Fox play-out facility and master control room in Hilversum.”

The conceptual difference of the sports studios is that the content sits right at the center—not only for TV but also for Internet streaming (and C-Cast) of mobile devices and tablets. “This enables us to deal more with sport and less with technical issues,” Vreeburg added. “The combination of incoming lines and the connection to the Studer mixer and the intercom givers us so much more flexibility.”

The Studer solution was adopted on the recommendation of DutchView, supplier of technical facilities and crew, working with Dutch system integrator D&MS. “We knew the quality and flexibility of Studer’s Vista series and were deliberating between the Vista 1 or Vista 5. Jinne and I visited the Integrated Systems Europe Show to satisfy questions about the MADI router, number of faders and stage boxes, Input/Output boards, de-embedding and routing. Niels [Mijnlieff, product specialist from distributors, Heynenbv] provided all the answers we needed and DutchView advised us to opt for the Vista 5 in view of the configuration required.”

The Studer platform was recommended for its audio quality, ease of setup, control and operation, the analog approach of the console and the experience DutchView has in working with the consoles. “We have lots of trained audio engineers who are extremely familiar with Studer Vista consoles and operating systems,” stated DutchView’s Robert Reparon. “There is also the possible expansion of the system with additional Studer preamp stageboxes from our own stock.”

Although DutchView has historically been the house supplier for Endemol, and supplied the facilities for the Eredivisies Studio (Dutch Premier League League channel) it nevertheless had to participate in a 3-way tender process. Having nominated DutchView, Endemol and Fox then addressed the configuration details—namely to build three complete new studios (designated 4, 5, and 6) each with four cameras and LED lighting, while Studio 5 and 6 each have six projectors for background projection in the set. The two Vista 5 consoles will mix programs in Studio 5 and 6, alongside Grass Valley vision mixers, Vizrt studio and match graphics.

All the signals coming from the venues, the master control room and local play out servers are merged into MADI streams via a third-party audio router. Local studio audio sources (such as mics) are patchable directly to the Studer D21 I/O frame.

Summarized Robert Reparon, “All our audio engineers are very satisfied with the Vista setup in the studios. They feel comfortable during the shows and are confident with a system on which they rely.”

And SjaakVreeburg concluded, “There is no comparison between the present configuration and the situation before, with usage of all eight audio channels, the incoming lines, live studio production, commentary positions and playback from EVS via the excellent interface between Riedel and Studer. This has given us greater flexibility, speed, multitasking, fewer faults and a better operation/understanding between directors and audio technicians.”