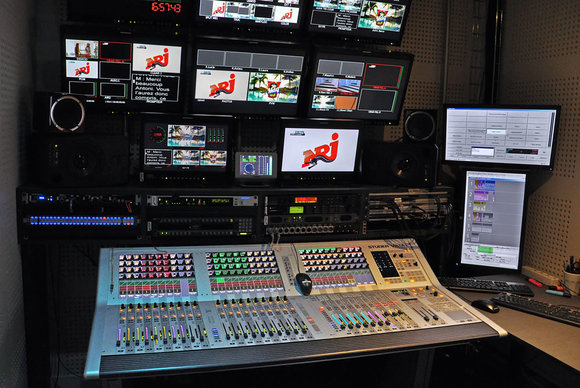 According to Cédric Drapeau, Technical Manager, it was important to upgrade to a console that could sustain the network’s production growth. “We have a variety of programming that takes place here at NRJ 12 and Chérie 25, so we need equipment that provides a high level of versatility to meet our varying needs,” he said.

To that end, NRJ chose the Studer Vista 1 digital console, which fits perfectly into the network’s technical environment.

The audio configuration of the two studios is based on an EtherSound network, allowing for easy routing and management of signals between the two TV studios and the control table. The Vista 1 has an EtherSound connection that can control over 32 inputs and 32 outputs to perfectly interface into the network.

The Vista 1 is highly suited to broadcast applications, with an integral DSP engine of 96 channels. The Vista 1 can handle mono, stereo and 5.1 inputs with ease, and is provided with 32 mic/line inputs, 16 line outputs and eight stereo AES inputs and outputs on rear panel connections.

The Vista 1 contains many of the same features as its larger brother, the Vista 5, including the patented Vistonics™ user interface plus features such as true broadcast monitoring, talkback, red light control, GPIO, N-x (Mix Minus) busses, snapshot automation and DAW control.

The Vista 1’s I/O can be expanded using the standard Studer D21m I/O controller’s card slot on the rear, to allow a wide range of protocols including MADI, AES, AoIP, ADAT, TDIF, CobraNet, Dolby E/Digital and SDI connections. A MADI link can connect to any of the Studer Stagebox range for XLR connectivity as well as other formats.