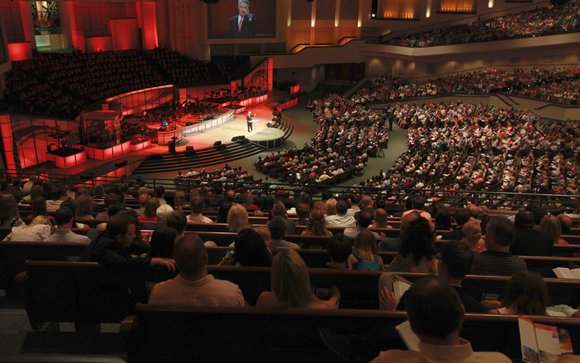 The weekly message preached from the Prestonwood pulpit is viewed and listened to all over the world through PowerPoint Ministries—the radio, television, and Internet ministry of the church. The message is also live streamed and available on iPhone and Android apps.

The weekend services at the Plano Campus of the church vary from a contemporary service on Saturday nights consisting of an 8-person rhythm section, an 8-person praise team, a worship leader and a 30-to-40 minute sermon. Sunday services consist of a 6-person rhythm section including Latin percussion, a 10-person praise team, a 40-piece orchestra and a 350-voice choir under the direction of Worship Pastor Todd Bell. The message from Dr. Jack Graham, pastor of the 30,000-member church, is simulcast to two other campuses along with a live streaming webcast.

“All in all, an average Sunday morning service has an average of 120 channels,” said Chief Audio Engineer Chris Schutz.

In addition to the weekend services, the worship space at Prestonwood is used for multiple events throughout the year, including worship services for the Prestonwood Christian Academy, performances by students and children and other special events.

“In December, the music ministry presents a large-scale, innovative and media-interactive Christmas production with a combined cast of 1,000 people,” said Scott Seal, Executive Director of PowerPoint Ministries. “The amazing thing is that more than 30,000 people attend each year from throughout the North Texas region, Oklahoma, Arkansas and Louisiana.”

Not all events are Prestonwood driven, however.

“We believe in supporting our local community,” Seal added, “so we also facilitate the graduation ceremonies for an average of about eight local high schools and one seminary, as well as convocations for a handful of area school districts.”

At the Plano Campus, Vista 5 M2 42-fader consoles have been installed at the FOH and monitor positions. Schutz noted the many advantages of the Vista 5 M2 over competitive consoles. “The Vistonics™ interface is one-of-a-kind for starters,” he said. “The simple layout of the desk gives the most analog feel of any digital desk I have mixed on. There is no channel strip; instead, I touch the EQ display on the screen for a channel and it is all right there in front of me. Combine this with excellent audio quality and these simple factors make the Vista mixing system the ideal choice for Prestonwood.”

The biggest requirement of the audio system at Prestonwood is flexibility, said Broadcast and FOH Engineer Armando Escobedo, as many of the events at the church run close together.

“During the weekend of a children’s musical, we will have our normal worship services along with rehearsals and the musical that Sunday evening,” Escobedo said. “It is important to be able to switch seamlessly through all of the events that weekend. That being said, our audio production has been designed to accommodate the diverse events; the new system is a hybrid of an installed/touring-type system.”

The Studer Vista system has enabled this flexibility by bringing the preamps to the stage for all three consoles. “The D21m satellite is the backbone of this design—we have three racks with three D21m’s in them, loaded with 40 channels of mic pre’s with a 3-way passive split,” Schutz said. “We otherwise would have had to install an extensive copper snake system with multiple patch points throughout the stage to accommodate all of the inputs needed for a service.”

The Studer Vista 9 was chosen to replace a Yamaha PM1D console at Prestonwood’s HD broadcast facility because of its flexibility and accommodating I/O solutions. “We really like the console’s ability to expand to the number of inputs needed from the stage [180 channels] and record out to ProTools via the MADI protocol, for later post-production work,” Escobedo said. “Also, having the control room monitoring solution enables us to listen to multiple formats so we know exactly what is going out to several different outputs: for example, the mix-minuses that are fed to our other campus locations. The Vista 9 also gives us the ability to come right back into the console on a secondary input on each channel for the remix and layback to video.”

The media team at Prestonwood will be relying extensively on Studer’s AutoTouch Plus Dynamic Automation, to allow for the post-production results to be similar in tonality to the live mixes, Schutz said.

Configurability of the Vista consoles also gives Prestonwood the flexibility it needs. “The inputs of all three Studer consoles are configured similarly, yet their output capabilities are different based on each of the mixing positions,” Schutz said. “Once I learned how the D21m satellite racks could be employed, the wheels started turning on how to make our audio I/O portable and flexible. All this, coupled with the service from the Studer sales team and technical department, has been amazing.”