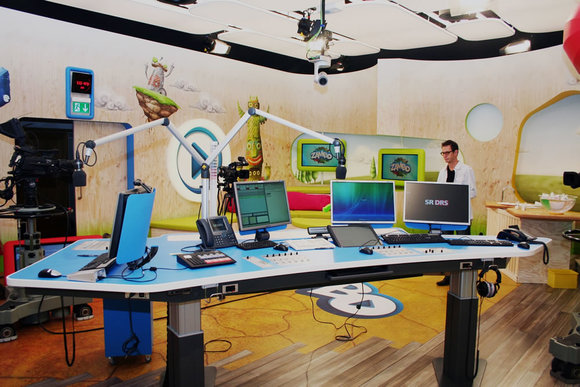 ZURICH, Switzerland - Broadcasting since August 2010 on Swiss television (SF) and radio (SR DRS), Zambo is a multimedia world for children, aged between seven and 13, in German-speaking Switzerland. In the programme viewers are taken on a trimedial discovery trip – via television, radio and online.

With the creation of the Studio 30 on the Brunnenhofstrasse in Zurich, the technical pioneers of Swiss Radio and Television (SRF) now have an infrastructure that is unparalleled — with a Studer OnAir 3000 mixing console at its core.

Situated in the old building of a large complex of radio studios, the technical requirements of the installation provided an almost insurmountable challenge for even the most accomplished specialists — since Zambo is broadcast both on SF2 and DRS 1 — as well as the Internet!

For installation project manager Thomas Wochner from broadcast service provider TPC, this ‘trimedial’ task meant that new technology would be required in abundance, with the ability to combine workflows for production, studio direction and editing purposes.

To accomplish this, a self-operated broadcast system was specified, which handles not only the daily Zambo radio programme, but also remotely-controlled cameras and automated web content feed.

Since it was also a requirement to keep the workflows streamlined, the central audio-mixing console needed to be operated as simply and intuitively as possible. The programme staff themselves perform many technical procedures, such as shooting and cutting, and the editors plan the content, cut the film, and edit the material.

The production workflow is file-based. The innovative output control allows both the playout of pre-produced material as well as live footage. The studio cameras are controlled from the radio broadcast control room, making possible live audio-visual streaming to the Internet during the radio broadcast.

Not least because of the high requirements for automation and user ergonomics TPC chose a Studer OnAir 3000 mixing system for use in both studio and control room. The central SCore drives 42 faders — 24 for camera direction and 18 in the self-op studio.

In addition to the SCore engine, there are two further sets of Studer I/O Frames, one in the central engine room and the other one in a local studio rack. The Studer Call Management System (CMS) and a DigaSystem Broadcast system have been carefully integrated; for call-ins and telephony infrastructure the Zambo studio infrastructure is networked to the central CMS at Brunnenhofstrasse, which is hub for all SRF’s radio programmes.