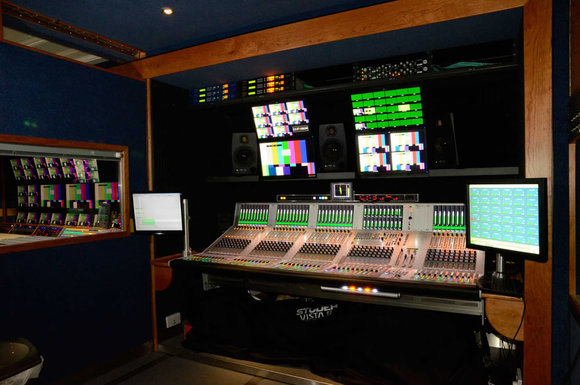 CORK, Ireland — Faced with a busy summer of sporting and music event production, Irish OB specialists Television Mobiles Ltd (TVM) decided to boost its fleet with the commissioning of its first 3D-capable OB. The fully-featured, 30-camera HD 3G truck, offering monitor capability of 1080/60p signals, upholds the company’s long relationship with HARMAN’s Studer Vista consoles, with the first Vista 9 in Europe to incorporate backstop PFL at the heart of the audio control.

“The new unit had to be fully 3G capable and audio embedded,” explained TVM owner Bart Arnold. “As for backstop PFL, this was part of the original spec — if you are used to fader-controlled backstop PFL it is hard to do without, and provides a more elegant fade solution.” Studer implemented this now standard Vista option for TVM.

“We also like the layout of the Vista 9 — particularly its ease of use for someone moving from analogue to digital, and we like the optical fibre options of Studer’s D21m and new Compact stage boxes. The desk itself has some nice innovative features, such as FaderGlow™.” This last feature provides the operator with an instant overview of the console status by illuminating each fader in one of eight freely-assignable colours.

TVM has enjoyed a relationship with Soundcraft Studer dating back to their first truck in 1986, which featured early Soundcraft 200, 400 and 800 consoles. In 2007 they embraced their first Studer Vista console, installing a Vista 5 in OB3 and later a Vista 8 became a central component in the fast track fit of OB7. Soundcraft still retains a presence at TVM, with an Si3 handling the audio mix in OB4 and a new Si Compact 16 specified as a sub-mixer/grams mixer in the new OB8, sending MADI and AES signals to the main desk.

But this time, confirms Arnold, they had a much longer lead time to design their first 3D truck, and after an 18 month gestation, coachbuilders A Smith Great Bentley Ltd. delivered a vehicle that provided TVM with a flexible studio environment. The design was a particular challenge to their Senior Design Engineer, Bob Hanks, but he came up with an innovative solution to meet the requirements. “This included separate Tx / comms areas — and a very large sound production room with the digital mixer placed in a quiet environment where it is not exposed to the clutter of comms and line checks, and leaving the engineer to focus on the sound mix. This concept works well and the truck is adaptable to our work model.”

One innovation, he emphasised, was having all the audio embedded in the video signal, accessed via the hybrid router. “There are no separate audio feeds found on the truck, resulting in a massive reduction in wiring,” Bart Arnold confirmed.

He adds that OB8 has justified the large investment as the Co. Cork-based company continues to work alongside providers such as Visions, SiS-Live, CTV and Telegenic, generally on sports and music production. With the latter they covered the Isle of Wight Music Festival in 3D and have also been mixing in 5.1 for Premiership football, the Open Golf Championship at Royal Lytham & St Annes and Heineken Rugby, for clients such as ESPN, Sky and BBC.

The Vista 9 can cope comfortably with all requirements. From surround input channels with an intuitive input balance section to stereo input channels with a 5.1 up-mixing panner to automatic down-mixer processes for outputs, everything is integrated — including dual speaker group 7.1 control room monitoring connectivity.

“We are fortunate in being supported by a great after-sales team from Studer, and that is very important to us and a key factor in our decision making,” concluded Arnold.