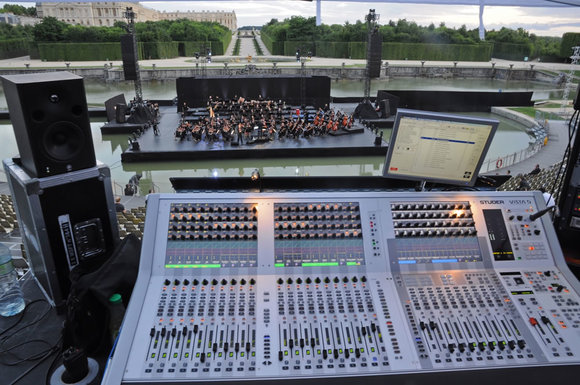 The concert, performed in front of 7,000 people, was held in the middle of La Fontaine de Neptune basin — on a concert stage especially set up for two months in the summer, specifically to stage spectacular events of this nature.

The sound reinforcement system was provided by French distributors, DV2 while the two Vista consoles were loaned by Audiopole, the French Studer distributor.

FOH sound engineer; Jean-Marc Aringoli, was already familiar with the Studer topography having used the Vista 8 for several years to mix ambitious live musical spectaculars for television such as Les Victoires de la Musique at the Paris Zenith.

He wanted to test the Vista 5 at a major outdoor event, believing the quality and innovative features and connectivity of the top-of-the-range Studer platform would best serve a traditional event such as this. A presentation by Audiopole’s Jean-Luc Gerard reinforced that belief.

After consideration it was decided to use one Vista 5 at FOH and one on monitors (for Alex Maggi), knowing that this would create an improved workflow.

A total of 80 mic inputs were divided between the two desks, with the FOH and monitor Local Racks respectively linked to the Stagebox via 150-metre MADI optical fibre snake. The show was digitally multitracked using a Tascam X48.

Stated Jean-Marc: "We achieved an excellent audio quality over the 150-metre fibre cable, with transparent mic preamps. This was perfectly set up for a classical music event of this type where you want to retain the dynamic of the signal — despite working in an outdoor environment, and with a very large number of microphones.”

Use of Studer’s Virtual Surround Panning (VSP) — the onboard DSP which is also used to calculate appropriate frequency and time-based changes as a sound is panned — was a further bonus.

“The EQ’s are very efficient,” continued Jean-Marc. “We had delays on all inputs to compensate for the distance and the VSP, with stereo pan simulation, was astonishing — you can now have a real stereo image for the entire audience.

Despite his extensive experience, Alex Maggi, was using the Vista 5 for the first time — but was no less enthusiastic about the Vista 5 SR. "This is an excellent console, offering huge possibilities. The control surface is easy to learn and the strip setup allows an impressive customisation of the surface. I really look forward to using it over a longer period."

Both men were unequivocal in their praise for this console. “It was the perfect choice for this event," they agreed.