Studer Vista 5 SR Takes on All Competitors at World Gymnaestrada 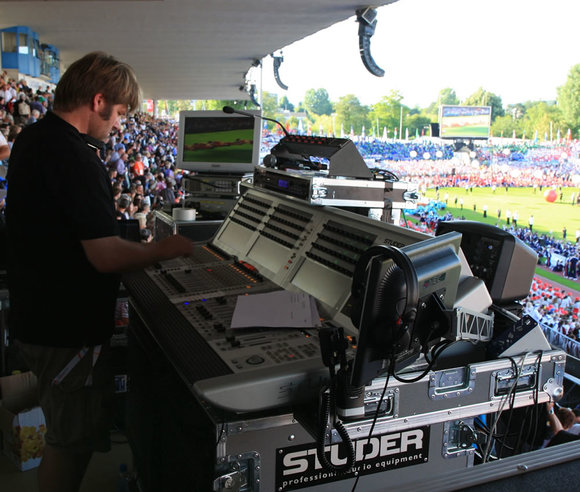 The highly configurable Vista 5 SR console used a setup of 208 input channels on a small footprint of only 32 faders, thanks to its Vistonics™ user interface. This made the console the ideal choice for Martin Reich, who planned the audio installation with Skynight, and also manned the desk during the event with the help Riedel RockNet’s digital audio network.

“We decided to use the Vista 5 SR with Rocknet because it provided the greatest amount of flexibility right through to the end of the event,” Reich says. “One example is that after the opening ceremony some of the stages with live music were not used anymore. This system allowed us to simply remove the unused stageboxes without the need to reconfigure the network. Thanks to the good preparation and cooperation of all involved, the system was up and running within the shortest possible time, and it ran throughout the event without a glitch!”

In total, more then 180 audio sources coming from four different stages around the stadium had to be transported to the FOH position. Cable runs were long, with the connection from the west stage to the east stage running 300 meters. Thanks to the Rocknet system that makes use of either Cat5 or optical fiber links, heavy analog multicore cables were eliminated from the system design, and sources were plugged into one of the 12 Rocknet stageboxes and converted to the digital domain directly at the place where they originated. This was the first large-scale event where three Rocknet rings were connected to a Studer Vista console—and the success of this World Gymnaestrada is a result of the ongoing collaboration between Studer and Riedel.