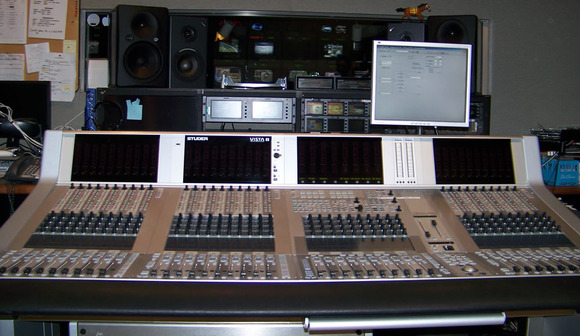 LOS ANGELES, California — Illustrating how HARMAN’s acclaimed Studer Vista 8 digital console can raise the bar for audio in any broadcast application, TVG, the official television and Interactive Wagering partner of the National Thoroughbred Racing Association (NTRA), has installed a new Vista 8 at its broadcast production and post production facilities in Los Angeles.

TVG provides live feeds, via cable and satellite distribution including the DISH Network and DirecTV, of all major thoroughbred races from all the leading race track venues in the U.S., as part of the online wagering activities of its parent company, the Betfair Group, the largest online betting organization in the world. The Studer Vista 8 console is the centerpiece of TVG’s strategy to move horseracing broadcasting into the high-definition era, bringing with it high-quality 5.1 surround audio, for programming such as “Trackside Live,” TVG’s flagship show.

“The Vista 8 will be our main console for all of our production and post-production,” states Frank Walters, TVG’s Manager of Engineering, who adds that the console will be fully commissioned in its facility this summer.

Walters, who says the network’s transition to HD should be complete by next year, was a champion of the Vista 8 from the moment he first sat down behind one. “In the end, all of the digital consoles out there can do many of the same tasks, but the difference with the Vista 8 is the sheer user-friendliness of the console,” he said. “I sat down with a console from one of the other leading broadcast manufacturers and I was lost for the first 20 minutes. I sat down at a Vista 8 and felt like an expert in five minutes, it’s just that simple to use.”

To Walters, that simply underscores what he and his mixers can accomplish with the Vista 8’s sophisticated capabilities. “We have as many as 10 live horse track feeds per hour and we’ll show one right after the other, with commentary from the track and our studios, as well as the ambient sound from the tracks,” he explains. “It’s a lot to manage, but the Vista 8 will make that job much easier.”

Walters cited features such as Studer’s patented Vistonics™ user interface, which provides unmatched analog console-like control and a clear, easily understandable display of all operating parameters along with fast, easy operation, and the surround sound management and mixdown facilities. “Features like that won over my senior audio mixer,” says Walters. “The Vista 8 is going to be a game-changer when it comes to horseracing on television. I’d say we made a very good bet.”