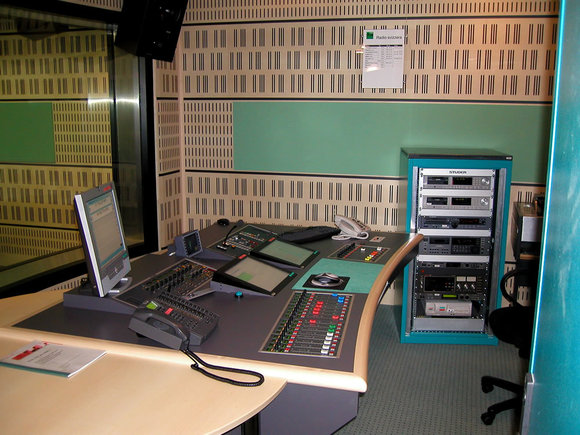 2004 has been a great year for Studer and leading Swiss radio broadcaster RSI, which has just placed an order for a Vista 8 digital audio production console for its new UM-2 OB Vehicle.  The arrival of the Vista 8 will complete RSI's station-wide showcase of Studer technology: even though they are still refurbishing studios, RSI already owns at least one of every product in Studer's audio broadcast portfolio.

RSI is the radio division of  Radiotelevisione Svizzera di lingua Italiana, and operates Rete Uno, Rete Due and Rete Tre, the public radio stations which cover the Italian-speaking region of Switzerland.  By the end of 2004, all three on-air studios, an emergency on-air studio, the production on-air control room and the newsroom for these three channels have been fitted out with Studer equipment.  The list includes Studer's digital OnAir5000 on-air consoles, routing and processing systems such as the Studer Route5000, and Studer DigiMedia and DigaSystem radio automation products.  Also installed at RSI are a Studer Vista 7 digital production console, a Studer A928 analogue production mixers and three on-air desks, a Studer OnAir2000 and two Studer OnAir500s.

Most recently, RSI has placed an order for a Studer Vista 8, which is intended for installation in a brand new all-digital Outside Recording and Broadcasting vehicle, "UM-2", currently under construction and due to start work in June 2005.   "We have so many Studer products, and we have always been happy with them, that was the first reason for looking at the Vista console," says Francesco Gonzato, RSI's production and project manager of musical studio and outside productions.  "Our assignments for this OB van include many festivals and big concerts, but also many classical recordings, including those featuring our own orchestra.  We needed quite a large mixer, one with 48 microphone channels, and, out of all the possibilities, the Vista was the most interesting digital desk for us.  Its operating concept is a very good mix of traditional and modern methods, so that the ergonomics seem familiar to engineers of all backgrounds."

New orders have also been received for an OnAir3000 and an OnAir1000; these digital consoles are intended for RSI's Studio 6, reserved mainly for speech-based programming and panel discussions, especially larger groups.   Additionally, Studer is supplying a S3 Surveillance System to monitor almost all the broadcast equipment in the RSI studio building in Lugano.