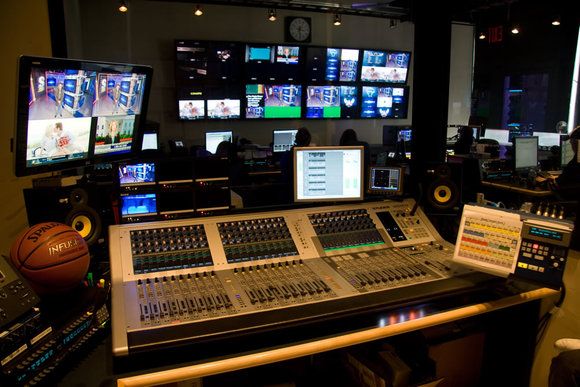 The Score is a Canadian English-language cable television sports network, broadcasting live sports coverage, as well as sports news, highlights and analysis. The design of The Score’s new HD studio required a console that could handle SDI inputs and outputs. “Some of our shows would require bringing in live NBA, NCAA basketball and football feeds,” says Michel Blondin, Supervisor, PCR for The Score. “For example, our show, ‘Court Surfing’ would bring the viewer up to 10 different NBA games at any given time. We basically changed the channel for the viewers, bringing them the best action of any game.”

Blondin also notes that intuitive operation and recall-ability were also key factors in The Score’s decision to purchase the Vista 5. “The layout of the desk with the Vistonics™ interface was nicely spread out and extremely user-friendly, which made the transition from analog to a digital console easier for the audio operators,” Blondin explains.  “Additionally, the new studio is in use live from 7 AM to midnight with up to eight different shows on a daily basis. Having the ability to save and recall different board setups [snapshots] for each show was a must.”

Since installing the Vista 5, The Score has seen a vast improvement in its efficiency and creative potential. “All the audio gear required for live broadcasting is now at our fingertips,” Blondin says. “Workflow has increased and we always seem to push the envelope, sometimes doing two shows at the same time!”

In addition to the Vista 5’s functionality, Blondin has also been impressed with Studer’s support. “Studer has been there for us every step of the way, from introducing us into the world of digital mixing to keeping us up to date on software updates, while dropping by from time to time to see how things are going,” he said. “All in all, the Vista 5 is a solid console that has been put to the test and has surpassed our expectations.”

For more information on The Score, please visit www.thescore.com