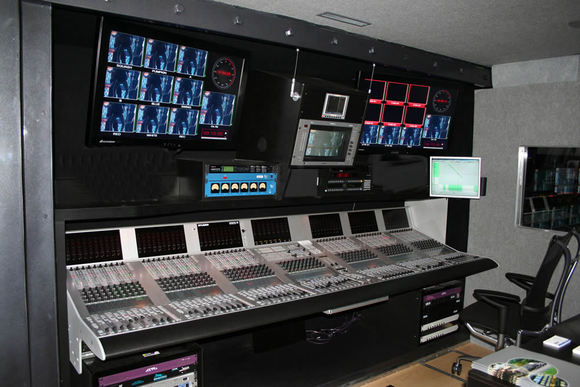 LAS VEGAS - May 2006 -- Manhattan-based mobile production services provider All Mobile Video recently put the finishing touches on ‘Titan’, its new flagship high-definition video truck, which made its official debut at the 2006 NAB Show on the Sony Electronics stand (SU107). Aside from featuring the latest HD cameras, VTRs, monitors and related video infrastructure, the new unit boasts one of the world’s largest Studer Vista 8 digital audio consoles – this one being even bigger than the first Vista 8 that AMV installed in its 53-foot triple expando ‘Celebrity’ truck last year.

At just under 10 feet wide, Titan’s 72-fader console comprises 96 mic/line inputs, 80 pairs of AES inputs, 56 bi-directional MADI I/Os (plus 56 more for connection with DASH multitrack machines), 120 analog line outputs, and is accompanied by an extensive outboard DSP rack. An additional 24 analog line and 16 AES inputs on a remote I/O unit at the end of 500 feet of hardened fiber cable further enable the desk to be used with other OB vehicles. Given its sheer size as one of the longest Vista 8s ever manufactured by Studer, the console has been integrated lengthwise within the truck rather than in the standard forward-facing orientation.

“With two of All Mobile Video’s units now equipped with Vista 8s and a third desk on the set of Martha at Chelsea Television Studios, it should be fairly obvious how pleased we are with the console’s acceptance, performance and reliability,” says AMV/Chelsea President Eric Duke. “There’s no doubt that our new Titan truck really impressed those who saw it at NAB, and part of that ‘wow factor’ can certainly be attributed to the Vista 8. It is a remarkable desk.”

Measuring 66 feet long and 21 feet wide when fully expanded, Titan undeniably lives up to its name by being the largest production truck to hit North American highways. Capable of accommodating up to two dozen HD/SD cameras and VTRs, the vehicle garnered considerable attention and praise at NAB, including receiving Television Broadcast’s coveted ‘Top Innovation Award’.

The Studer Vista 8 digital live production console combines and extends the powerful on-air features of the Vista 6 with the dynamic automation of the Vista 7 to create a highly sophisticated and flexible multipurpose live broadcast desk. In addition to common Vista series features like the intuitive Vistonics™ interface, Virtual Surround Panning (VSP™) and AutoTouch Plus dynamic automation, the Vista 8 offers a completely redesigned central control bay, greatly extended output metering and matrixing, and a host of other significant features.