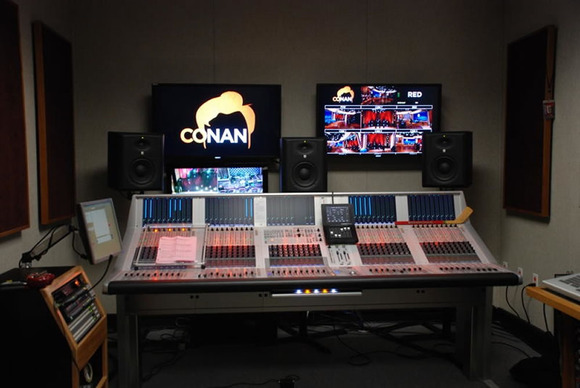 LOS ANGELES, California – Conan, the new late-night talk, music and entertainment show hosted by award-winning comedic talent Conan O’Brien showcases O’Brien’s tremendous versatility as a performer as well as his eclectic tastes in musical guest artists--not to mention his all-star house band led by guitarist Jimmy “V” Vivino. To handle that kind of performance diversity, Conan needed mix consoles for both music and production dialog that could keep up with the fast timing and quick turns of the show, and that’s exactly what the two Studer Vista 9 digital consoles specifically installed for the program at the Warner Bros Studio Facilities’ Stage 15, in Burbank, California provide. Studer Vista 9 consoles are used in both the Music Mix control room and in the Production Audio mix control room, both of which were designed and equipped by Sound Design Corporation.

“Conan’s shows are a huge mix of talk, stand-up, sketch comedy, remote locations and live music, and they’ll go from one to the other in a heartbeat,” observes 6-time Emmy® Award winner Paul Sandweiss, President of Sound Design Corporation, and Sound Designer for Conan, as well as O’Brien’s stint as host of The Tonight Show Featuring Conan O’Brien. “The show is so fast-paced that, unlike most late-night talk shows, in addition to main production mixer Mike Stock and music mixer Brian Lodato, we also have a dedicated sound effects mixer, Rob Ohlandt. The consoles for this show have to be able to keep up.”

That’s exactly what the Studer Vista 9 consoles do. Sandweiss had specified the Studio Vista 8 console in the control rooms for The Tonight Show Featuring Conan O’Brien and was completely satisfied with that experience. “We were totally impressed with the performance of the Vista 8, and the Vista 9 brings even more features and functionality to this show,” he says. Conan is a pretty packed show in terms of how many I/Os we need to cover dialog, sound effects and music, and the Vista 9 has the capability to share console cores, meaning that we get 96 channels of digital cross-connectivity without giving up any of the I/O in either console. We created a common MADI stream between the two consoles so we can have two hard drive recorders running all the time backing each other up. It’s true redundancy--the record paths go to and from both consoles, it’s great to have that kind of backup protection. We can do any fixes from either room.”

Sandweiss expresses his happiness with the other new Vista 9 features, such as the inclusion of P&G faders; the unique HISTORY metering mode that records events such as overloads in the audio path of each channel and highlights them in red on the channel waveform, allowing the operator to review which channel had such an event, up to 30 seconds after it occurred; user-definable FaderGlow™ and even the new, more steeply raked design of the work surface. “The Vista 9 sounds great, works great and looks great,” he says. “It’s everything you could want in a console for a complex show like this.”