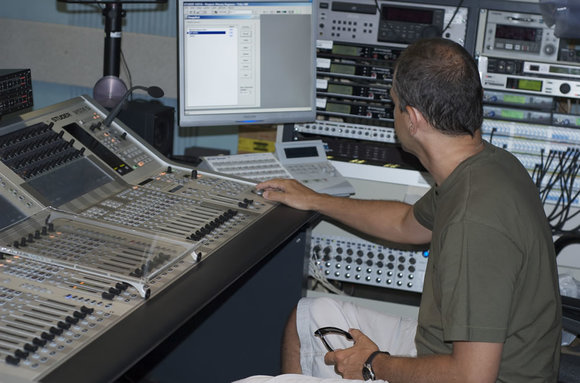 PRAGUE, Czech Republic – Czech sound engineers who regularly migrate between the public TV network and commercial stations become accustomed to the uniformity of Studer workstations, such as the Vista 7 and Vista 8 wherever they go. In fact, the Studer pedigree is so popular in the Czech Republic that when the private station TV Prima (the country’s third largest) was ready to decommission its analogue desk, which was regularly breaking down, the choice was self-evident. Studer would not only provide a reliable digital upgrade with long term expansion possibilities, but the station knew its engineers would require no training.

“It helped that the engineers could make a seamless transfer because the upgrade decision had to be made quickly,” reports Libor Havlicek of Auditech, Studer’s Prague-based distributor. “It had reached the point where on some occasions prime time news was being broadcast — without sound!”

The new Vista 5 is located in the main control room, which connects to two studios, with the main news, all sport events and even popular game shows mixed to air using the Vista 5. TV Prima also owns the exclusive rights for to the British Premier League, which requires the most complex system configuration, with all sends and returns compressed in two layers on the desk, and four live studio mics for inter-match studio debates.

The new console draws on mainly analogue sources, feeds and returns. “Since the Vista 5 is used for home production as well, there are some 12 portable microphones connected to the matrix,” Mr. Havlicek explains. “The two studios have all their microphones wired to Ghielmetti patch bays which are also connected to the Vista system 5.”

Two telephone hybrids, with remote control, allow live entries into the programme — for example, the hybrid is also used during the Premier League football, when experts are contacted to add their remarks over the phone.

Studer’s 32-fader Vista 5 consists of 20 channel strips, optimised for input channel operation, and 12 additional versatile strips for operating output and input channels. By using the standard Vistonics™ screen, up to 52 outputs are under immediate control.

A total of up to 240 channels can be accessed from the desk and laid out in any order, with the Vistonics system giving instant control over all related channel functions.

Prima TV had originally chosen the Vista 5 on the basis of its reliability (which would safeguard long-term investment), easy access to frequently used functions and excellent sound quality. With the planned move to HD, it will be a natural process to implement multi-channel sound (with expansion such as SDI embedder / de-embedder already in the planning).

Prima TV’s technicians have applauded this long-term view, as Senior Sound Engineer Petr Donev confirms: "Vista 5 is used permanently for all news and sport events. Our team is finding more and more value in the system for local production too. We like its easy operation — in fact, we don't need to concentrate on operational issues but instead can focus on the quality of the final mix.”