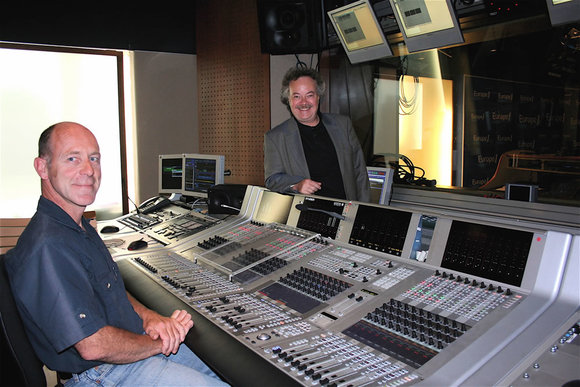 In Paris, leading national radio broadcaster Europe 1 has taken a 10-year old Studer D950 digital audio mixing console out of its flagship studio and replaced it with a 52-fader Studer Vista 8 digital desk.  According to Studer's French distributor Audiopole, this is the first time that they’ve replaced Studer's first-generation digital mixer with a Vista Series console.

Europe 1's Studio Merlin is a large on-air studio, capable of accommodating an audience of 150 people for a live discussion on the French presidential election, for example.  It regularly hosts a talk show, complete with studio audience, and twice weekly, presents a showcase of live music, On Connaît La Musique with Thierry Lecamp.

"The D950 was not really the right mixing desk for live music," explains Olivier Beneuf, Directeur of Exploitation at Europe 1 who is supervising the refurbishment of the studio.  "Initially we thought of using two consoles, one for the talk show and the other for the live bands, but this would have raised problems of integration.  The Vista 8 had the capability to handle all our needs from on-air broadcast to live recording."

Studio 1 regularly supplies musical material to its sister stations Europe 2 and RFM.  Some sessions are broadcast live, others are recorded, and the studio might handle as many as five groups in one evening.

Europe 1 has taken advantage of the August summer holidays to install the Vista 8, but Olivier Beneuf reveals that Studio Merlin might not be the permanent home for the console.  "We are planning to build a new studio, with space for a large live audience, which will be shared between Europe 1, 2 and RFM.  When it is completed in 2008, we will move the Vista 8 in there."