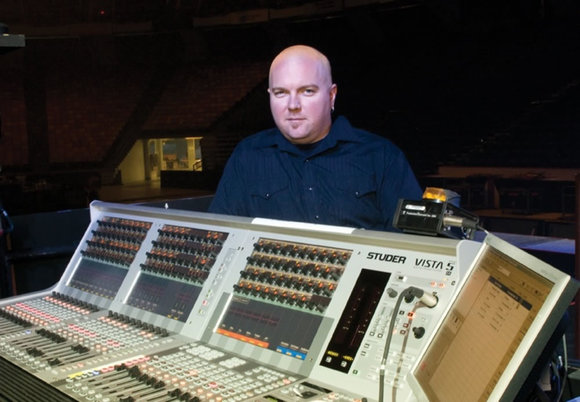 POTTERS BAR, United Kingdom – Green Day’s ongoing world tour in support of its latest album, 21st Century Breakdown, has its monitors mixed on the compact yet powerful Studer Vista 5 SR digital mixing console. It was the first and only choice for monitor mixer Beau Alexander, who has worked with the multi-platinum Green Day since 2004s American Idiot world tour.

Alexander, who has also mixed for artists including Tool, Hootie and The Blowfish and My Chemical Romance, says the Vista 5 is an excellent fit with the Green Day tour. “What makes it a great fit for Green Day is the number of outputs it has,” he explains. “When we started the 21st Century Breakdown record cycle, I didn't know if we were going to be using in-ears or wedges for monitoring, so I had to set the desk up for both, and when I did that I was using somewhere around 40 outputs, which the Vista 5 can easily handle.” Alexander is currently running 71 inputs along with 30 outputs (Green Day ultimately chose to work with in-ear monitoring).

But while Alexander initially chose the Vista 5 for its large input capacity, he quickly discovered how its advanced feature set and powerful performance characteristics worked in his and the band’s favor. “Now that I have it on tour there are so many more reasons to use the Studer over any other digital desk,” he says. “The Vista 5’s ease of use has made life simple. You can set it up to have all your master faders and VCAs all on a single page. And the Contribute function is amazing--being able to see everything that is going to the mix and being able to adjust on the same page with out having to first find the strip, then the aux, makes it incredibly convenient. The footprint of the console also helps us out tremendously because it frees up so much space for other equipment. And last but definitely not least, the board sounds great. It’s incredible. It’s the only digital board on the market that is giving analog a run for its money.”

The compact Studer Vista 5 digital live broadcast and production console combines award-winning Vistonics™-based technology with a highly cost-effective price. The Vista 5 is the first Vista console to be produced with PCB assemblies from Soundcraft Studer‘s new state-of-the-art manufacturing facility in the UK. While using a new SCore Live DSP engine, the tabletop-mounted Vista 5 follows the same operational principles and uses the same Vistonics screens as the Vista 6, 7 and 8.