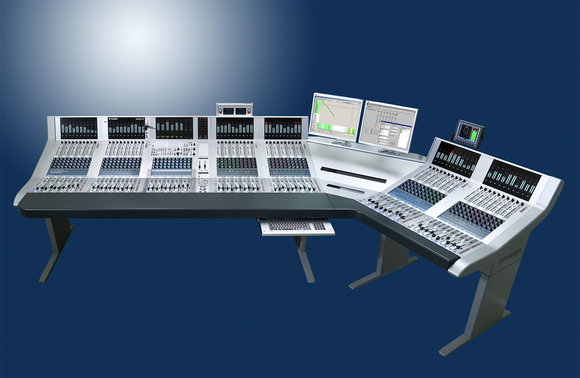 A 72-fader Vista 8 audio production console, with 516 inputs on its customised worksurface, is one of the largest digital desks ever built by Studer, and is to be installed in TC1, BBC Resources’ flagship television studio in London.

The system, which is being prefabricated at IPE system integrators, is expected to be used on its first productions in September.  This is the second Vista 8 for the BBC, which is already using this type of console in one of its larger radio OBVs.

The Vista 8 console, which will be fully equipped for 5.1 surround sound working and dynamic automation, will be used on a wide range of TV programmes, including the Children in Need telethon.  A large number of different operators will be using the Vista 8 in this facility, so it is vital that the control surface of the new desk is simple to learn.  When it is delivered in July, the console’s customised L-shaped worksurface will manage 194 mic inputs, and a total of 516 analogue and digital inputs.

The ergonomics of Studer’s Vistonics™ system has been acclaimed by engineers worldwide.  The flexibility of the DSP processing, and the availability of large numbers of I/O, is ideally suited to meeting the requirements of large television production studios, as is the Vista 8’s ability to allow its integral router to be controlled by external control systems.