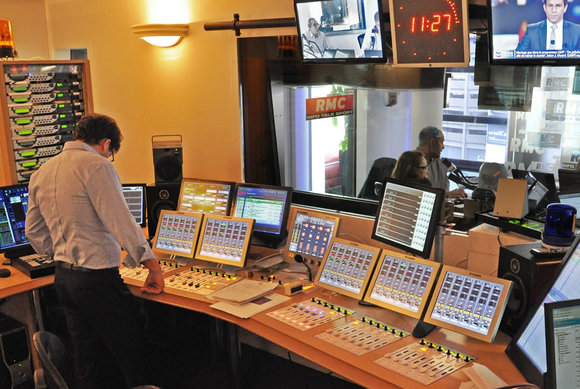 Originally created in 1943 in Monaco, RMC was acquired in 2001 by private French group, Nextradio TV Group, who opened new studios in Paris and closed down the facilities in Monaco.

Today RMC is ranked third among the privately owned radios in France; its on-air programme is focused on news and sports, interacting heavily with listeners, particularly during the morning show phone-in segments.

The new Studer consoles are the latest phase in a relationship with Audiopole that extends back more than a decade. When Nextradio first opened the new Paris studios in 2001 it equipped its three studios with Studer OnAir 2000’s—and Audiopole’s Broadcast Division Director, Jean-Philippe Blanchard, was again on hand to meet the latest requirement this time around.

Currently running with two identical studios (one dedicated to the on-air programme and the other to the production), RMC decided it was time to upgrade its consoles, along with some other equipment.

“Two teams were set up to survey the market—the user team and maintenance team,” said Ruben Vicente, Technical Director deputy in charge of the project. “Several consoles were evaluated and finally both teams decided upon the OnAir 3000.”

The desks are equipped with 18 faders to control the microphones, with the external lines coming from Codecs, the telephone lines and the audio servers.

The OnAir 3000 design is based around the same patented ‘Touch-n-Action’ philosophy as the successful Studer OnAir 2000, with colour GUI screens, which the station had used previously—but this time with a completely modular desk and a new DSP engine.

“We had been very happy with the reliability and ease of use of the OnAir 2000 and the studio technicians experienced the same way of working with the OnAir 3000—with a lot of additional functionalities. For example, the talkback system to the codec lines are now handled by a Talkback Box with displays, as part of the OnAir 3000 system. This box directly remotes the routing of the console.”

Future plans include the installation of a Studer RELINK system between the consoles, so that the sources can easily be shared.