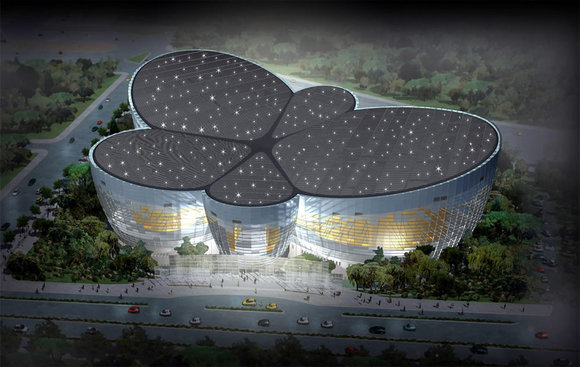 At a cost of nearly $100 million, Shanghai's gigantic new cultural epicentre is scheduled to open at the end of 2004. With three Studer Vista 8 audio mixing consoles specified for the main performance areas and a Vista 7 for the central control room, the Shanghai Oriental Arts Centre will showcase Studer's digital technology at the highest level in the Far East.

Enclosed under a stunning glass roof resembling a butterfly orchid are three halls, a 2000-seat symphony hall, an 1100-seat opera hall and a 300-seat auditorium. The building, which will cover 23,000 square metres, has been designed by the leading French architect Paul Andreu, celebrated for the Grande Arche de la Defense in Paris. Another Andreu project opening this year is the Beijing Opera House in Tiananmen Square.

The Studer consoles are being supplied by Advanced Communication and Engineering (A.C.E.), who are also the system designers and integrators. The symphony and opera halls will both be fitted with 62-fader Vista 8 consoles, whilst the 300-seat Auditorium will have a 32-fader Vista 8. All three consoles will then be linked via MADI to the 40 fader Vista 7 in the Central control Room.

Use of Studer's new D21m I/O system provides the capability for the whole system to run at 48kHz or 96kHz, and provides the infrastructure to communicate over 1200 inputs and 600 outputs - the total number available in the three-hall system – to the Vista 7 which will act as the main recording and broadcast feed as well as a router. The use of the D21M system as stage boxes and MADI allows for a large number of sources to be available while using the minimum amount of cabling, and built-in redundancy as standard. In fact, the whole console system is capable of having “true” redundancy, not only with signal distribution, but power supplies, DSP and also control system if required.

The new Vista 8 was chosen for the main live FOH desk in all the halls for many reasons. Because the Oriental Arts Centre is such a high-profile and state-of-the-art facility, reliability was of the highest priority. Studer’s reputation in the live on-air broadcast field provided a great deal of confidence and reassurance to the committee. At an operational level, the new Output Control Bay, utilising the Vistonics on the Vista 8, was seen to be one of the fastest, most intuitive and innovative ways of working live, providing more control and visibility of outputs than ever before possible.

Studer's Sales Director Ian Staddon explains that "the whole concept and operation of the Vista console was felt to be clear and easy to use, which had to be a consideration when many different engineers will get to use the consoles. To be 'future proof', the OAC wanted the option to be able to work in different Surround formats and the Vista’s ability to work in 5.1, 7.1, EX and have the unique 'Virtual Surround Panning' (VSP) feature was more than the OAC had hoped for. Also, using the same platform throughout allowed for easy interconnection between the halls and the control room, as well as the ability to be able to transfer projects from one console to another."

ACE’s track record of being a successful and reputable system integrator for large projects such as theatres, stadiums, broadcast stations and convention centres, was also a major factor in the whole decision making process. ACE supplied system design and consultancy for the project, and will be supplying and installing virtually all the audio components, as well as the lighting.