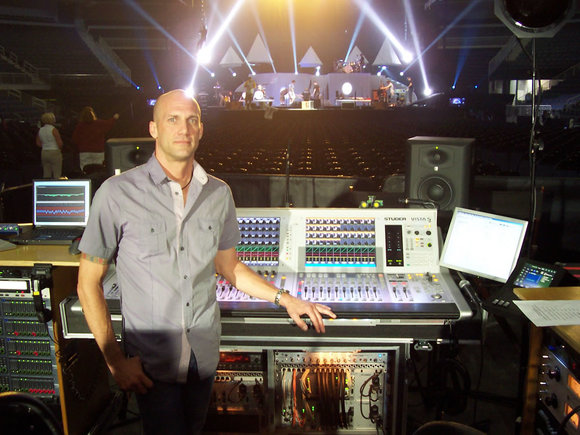 The 2009 tour, which included 52 concerts, sold out within minutes, prompting a second leg of the tour to be added for 2010.  Sound Image’s FOH engineer on the Taylor Swift tour, Russell Fischer, stated, “The goal was to bring Taylor Swift’s brand of country pop music to life, and to get the show’s energy and feeling across to an already excited crowd.”

According to Fischer, Sound Image chose the Vista 5SR for its audio quality and versatile control surface. “The audio quality is the most obvious advantage over other digital consoles,” stated Fischer. “Being able to do six different things on different channels and input data all at once is a huge advantage when you are mixing live. The main challenge throughout the tour was covering the audience evenly around to 240 degrees, along with keeping track of close to 70 inputs.

“I’ve worked with the Studer Vista 5SR before. We had it since the summer and I loved it from the first sound check.  It’s been the most reliable digital console I’ve used and I’ve found it to be a very easy platform overall,” Fischer adds.

For Fischer, this was his first experience with Crown’s I-Tech HD amplifiers. “I’ve been using Crown since the DC series. Lately, I’ve been using the original I-Tech amplifiers, but for this tour we went with the HD series. They have been reliable and improved the sonic quality of the speaker system; overall they’ve performed great.

Additionally, Fischer also felt they benefited from being able to deploy Harman HiQnet System Architect™. “In the end we benefited by deciding to go with the I-Tech HD amplifiers because we ended up with better audio and we had more control of the amps using System Architect,” Fischer says.