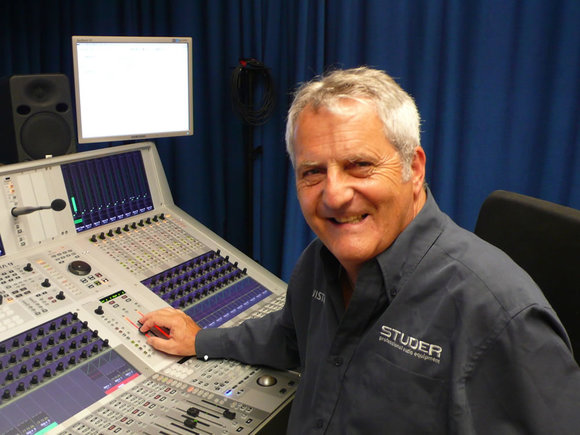 Bruno Hochstrasser joined Studer in 1971 and was highly instrumental in Studer’s domination of the high-quality, recording studio tape machine market with iconic models like the A800 (he was actually the product manager for its launch in 1978!), amongst many others.

In 1990, Bruno became President of Studer. During the 1990s, the company reinvented itself following the demise of tape, and Bruno led Studer to become the digital mixing console brand it is today. Less than two years ago, Bruno decided to go into semi-retirement but remained connected with the company as a brand ambassador, mainly in the Middle East, Africa and Europe.

“Bruno is today’s Mister Studer,” said Andy Trott, “He has remained proud and loyal to Studer for over 40 years and I’m delighted he has succumbed to me tempting him out of retirement! We are facing a fascinating new era as we rejuvenate Studer with many new talented staff and the development of some groundbreaking technologies and this will require an experienced hand on the wheel. Bruno is liked and respected by our staff, distributors and customers alike, and I can’t think of anyone better to do the job.”

Studer recently launched the biggest recruitment campaign in the past 10 years and is expanding its R&D, Sales and Service teams, already resulting in several new appointments in the US, UK, Australasia, South America and Asia announced in the past six months. In June, Studer also launched its biggest education programme ever. The SBA (Studer Broadcast Academy) provides certification training for freelancers, staff engineers and system integrators worldwide, starting in the UK with courses run in the factory and via the 73-foot long Studer broadcast truck in the US. A European programme is expected to start in the autumn.

Bruno added, “For the past 40 years, Studer has been my life; I’ve seen it grow and reinvent itself and emerge as the best digital broadcast console business in the world today. The broadcast market is such an exciting place to be at the moment with so many changes presenting new opportunities for us manufacturers; we have some challenges ahead, but with our renewed investment in bright new people and some amazing new technology developments underway I truly believe we are at the start of a bright new beginning.”