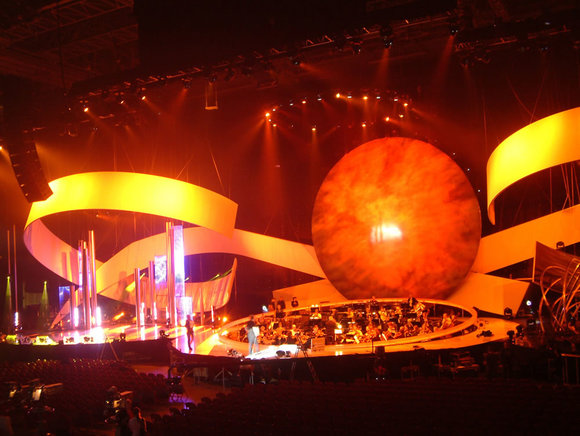 Not only is this one of the proudest moments in the Norwegian calendar, it is also one of the most widely broadcast events in the world. Staged in Oslo's Spektrum Arena, the huge concert which celebrates the award of the annual Nobel Peace Prize is recorded by NRK for broadcast to more than 100 countries, and watched by more than 500 million viewers.

6,000 people and an international line-up of stars gathered in Oslo to mark the award of the Prize to Muhammad Yunus and the Grameen Bank; on stage were Simply Red, Rihanna, Lionel Richie, John Legend and, in a rare performance, Yusuf Islam (the artist formerly known as Cat Stevens). From America, the nation's leading soprano Renée Fleming joined actresses Sharon Stone and Anjelica Huston, who were there to present the show.

Norway's national broadcaster NRK brought three of its highest-specification OB vans into the Spektrum to handle the TV production. All three trucks were equipped with Studer digital audio consoles, including the flagship of the NRK fleet, the HD-1 which has a 52-fader Vista 8.

With the 64-piece Norwegian Radio Orchestra occupying the central section, the left and right wings of the huge stage alternated with live performances, enabling ultra-smooth changeovers between guest artists accompanied by the Nobel Band, NRO string section or full orchestra.

Six Studer stageboxes, providing between 44-48 inputs and 8 returns each, were positioned at the side of the stage, handling a total of 264 inputs. Inputs from the artists on the two side stages were sent to music producer Gaute Nistov in Truck 1, NRK's OBL12, which is equipped with a Studer D950 audio console. The Orchestra was mixed by Truck 2, the TR-23 which has a 52-fader Vista 8 desk, and the mix was then sent onto Truck 1/OBL12. The finished stage mix was delivered to Truck 3, the HD-1, where NRK's Jon-Dag Skagmo added presenter and audience feeds to create the final mix on his Vista 8.

Skagmo has worked on the Nobel Peace Prize Concert since 1998, and vows "I definitely would never do this show again on analogue consoles!" In terms of allocating the OB resources to the different tasks, he explains that, "it's natural to have the final mix together with the video production (HD-1): we could swap the audio vans but the mix engineer Øystein Halvorsen is so accustomed to the D-950, it is logical to give the orchestral mix to Morten Hermansen and Per Ravinaas on the Studer Vista 8."

Jon-Dag Skagmo (pictured) has been a regular in the HD-1 OB since NRK took delivery earlier in 2006, just in time for the Winter Olympics in Torino. This high-definition production environment, fully equipped to handle digital surround sound, NRK's goal for HD-1 is 160 production days a year, 70% of which will be sporting events.