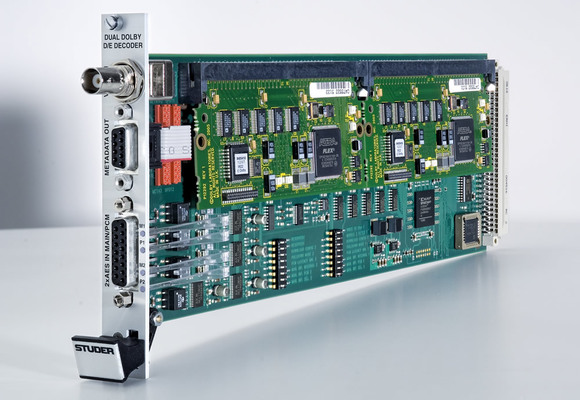 The Studer D21m I/O system, used on the Studer Vista and OnAir 3000 ranges of digital consoles, has been further enhanced by an optional I/O card for signals encoded with Dolby® E.  Studer is one of the first console manufacturers to offer such expansion possibilities.

Dolby E is a professional audio coding technology developed to assist the conversion of two-channel broadcast and other facilities to multichannel audio, by providing eight audio channels in the same space normally used for two. Among other benefits, audio encoded with Dolby E can be edited, decoded, and re-encoded many times without audible degradation.

A single optional I/O card accepts any AES/EBU stream containing signals encoded with Dolby E or Dolby Digital, decodes the stream within the input stage and then provides up to two sets of eight channels to the console.

One D21m I/O frame can take up to 12 of these cards in a 3U rack space, and each card may contain up to two decoders, making it possible to decode up to 24 Dolby E streams in just 3U of rack space. Dolby Digital or Dolby E encoded signals may be directly connected to the card’s front panel or patched via the console’s internal software patch window.

The ‘dual’ Dolby Digital and Dolby E decoder card also features an automatic switch to a second AES/EBU PCM input in case there is no Dolby E or Dolby Digital encoded signal detected on the main input. For example, this allows play back of video tapes with or without material encoded with Dolby E and the card will automatically switch to the correct tracks.