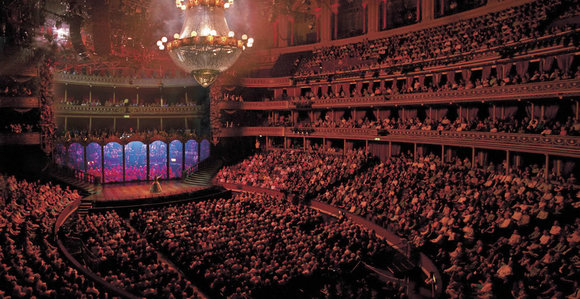 LONDON, United Kingdom— To celebrate 25 years of The Phantom Of The Opera, Cameron Mackintosh staged a special production at the Royal Albert Hall recently, with three sell-out performances over two nights.

“This is technically the highest channel count we have ever run from one truck,” confirmed Red TX managing director, Ian Dyckhoff. “It creates a bit of added pressure, but having so much combined experience between us is a real bonus.”

He added that in the past this channel count would have required a second vehicle. “But the Studer desk has enough inputs to surround mix everything independently. Thanks to the Vista 8, we can do it in one.”

Three recording stems were set up to record in 5.1 and stereo (for cinema) and 5.0 for other TV broadcasts. Rather than taking an automatic stereo down mix, Red TX created a separate stereo mix, providing greater control, for cinemas unable to take surround sound. They also employed a unique Cinema Matrix 5.1 setup that uses the X-curve for cinema equalisation.

Each Studer HD interface card can carry up to 192 channels in Vista systems at sampling rates of up to 96kHz, and is connected to the DSP core by standard CAT5 twisted pair cables. The system automatically detects newly inserted audio cards and assigns the required number of audio channels to them by pressing the front panel ‘Reconfig’ button—a feature Red TX finds particularly useful.

In fact RED II’s Studer environment, with D21m digital I/O frames and stage boxes, is configured to enable 192 channels to be recorded from the desk, with three MADI streams, 48 channels of AES (24 stereo) and 32 line.

Red TX had arrived at the Royal Albert Hall several days before the show for line checks, rigging tests and to set up templates—and with the lead characters joined by a cast and orchestra of over 200 the extended prep time was certainly needed, as the show proved challenging.

Working alongside live sound company, Autograph Sound, who supplied separate radio mic, choir and orchestra mixes to bring all the feeds into the truck independently, the RED II crew used 57 snapshots on the Vista 8, mostly for the orchestral arrangements. Said main sound engineer, Tim Summerhayes, “We used a standard 2-second crossfade on the snapshots and they were as smooth as silk.”

The production itself was a major success. In total the live broadcast was transmitted to 1,000 cinemas in the UK, a further 200 in the US and 200 in Europe.