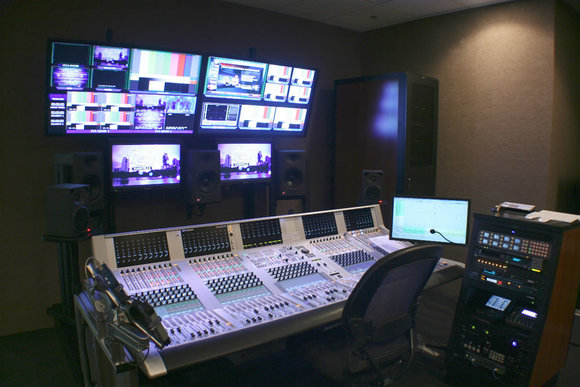 Russell Hall, TBN Nashville’s Station Manager, explained TBN’s reasons for choosing the Studer Vista 8: “We’re a global broadcaster, the sixth-largest broadcaster in the world. We produce a wide range of content including Christian educational, worship, variety, music, entertainment, children’s and even sitcom programming. We recognized that our existing 16-year-old analog broadcast facility could no longer meet our growing requirements, and upgrading it involved nothing less than a complete overhaul. Basically, we gutted everything and went from analog broadcast straight to HDTV.”

“For us, there was no other choice but the Vista 8, because of its audio routing capabilities and flexibility,” Hall continues. “TBN had already done three HD renovations of other production centers, and we had been putting in a complicated system of audio routers. We found that the Vista 8 eliminated the need for all of that--the Vista 8 can handle all of our complex audio routing needs with capability to spare. Its touchscreen control interface is easy to use--which is especially important for live TV broadcasts--and its sound quality is excellent.”

“We have many facilities in one, including a 1,400-seat auditorium, a park area that’s wired for outdoor shoots, and a recording studio,” says Greg Malenovsky, head engineer at TBN Nashville. “So we’re doing lots of different programming from lots of different places, and all I need to do with the Vista 8 is recall the settings for each show. I can reconfigure easily so everything I need for a specific shoot can be recalled. “

“Another advantage is that we already had Soundcraft Vi6 consoles for the studio floors and our theater,” notes Hall, “so it was much easier to interface the Studer Vista 8 with the Soundcraft consoles. We weren’t concerned about the cost as much as with getting in a system that worked seamlessly – but as it turns out, the Vista 8 was less expensive than competitive consoles, in addition to being better suited to our needs. In my opinion, the Vista 8 is the best console in the industry for HD audio/video production.”

“In addition to our in-house work, we cater to a wide variety of outside clients and producers who require us to provide complete production services,” says Hall. “We’ve seen an increase in business as the word has gotten out about our upgraded studio. In fact, some people who didn’t necessarily want to partner with us, and who normally would work elsewhere, have now decided to use our facilities.”

“I love the Vista 8 console for what we need,” Malenovsky concludes. “As far as ease of use, sound quality and versatility, we couldn’t have chosen a better console.”