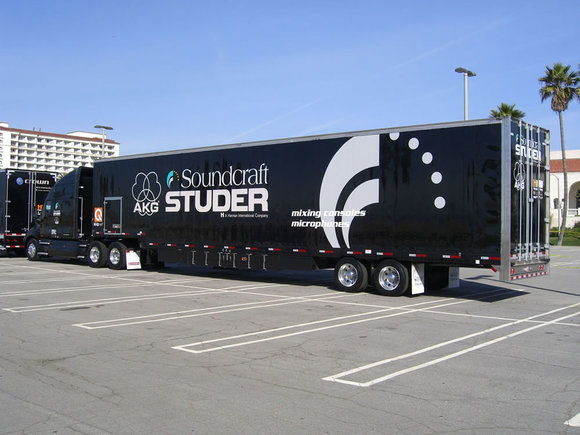 NORTHRIDGE, California - March 2006 -- Harman Pro North America (HPNA) is currently putting the finishing touches on a new semi truck with 53-foot trailer that will soon be used to showcase Studer and Soundcraft mixing consoles, AKG microphones and other Harman equipment to broadcast, contracting/consulting and recording professionals throughout the United States.

Modeled on the highly successful Crown truck, HPNA’s new mobile demonstration and training facility will make its official maiden voyage to the NSCA Expo in March (16-18, Las Vegas) before heading out on Harman Pro Roadshows in April (10-12, Las Vegas) and May (23-24, Atlantic City). After that, it will be frequently out on the road visiting broadcasters from coast to coast.

“This vehicle affords us the ability to spend more time with both current and potential customers and familiarize them with our technologies in a self-contained, controlled studio environment,” says HPNA Vice President and General Manager Kim Templeman-Holmes. “Being able to drive this facility right up to broadcasters’ and systems integrators’ front doors and allow them to be hands-on with our brands in a distraction-free, comfortable setting will undoubtedly prove to be mutually beneficial.”

The new trailer comprises two well-isolated environments – one room permanently housing a Studer Vista 8 digital live production console, and the other being highly configurable to host a variety of different demo/training setups. Aside from featuring Studer, Soundcraft and AKG products throughout, the mobile facility is also equipped with products from several sibling Harman manufacturers, including Crown amplifiers, JBL monitors/loudspeakers and Lexicon processors.

Midwest Trailer of Chicago supplied the trailer as well as performed much of the customization, with Imagination Pro Media (IPM) of Goshen, IN, handling the audio equipment installation and additional fabrication. Of particular note, it was IPM Vice President Joe Wisler, a former Crown employee, who originated the truck concept for the amplifier manufacturer nearly 15 years ago.

The tractor unit – a Kenworth T2000 – features an onboard 30kW, single-phase power generator, while a second generator is similarly built into the front end of the trailer enabling it to independently offer full electricity and air/heat without the tractor attached.