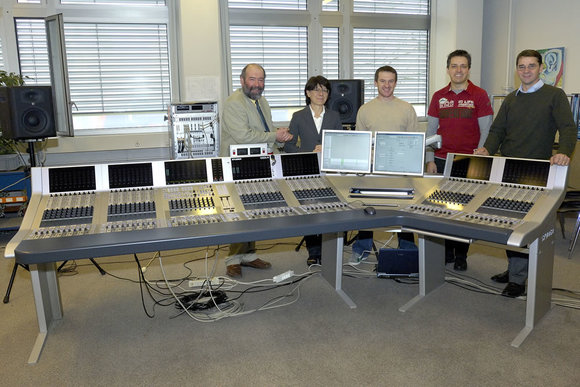 Studer has received an order from BBC Resources for a second wraparound Vista 8 digital audio console, to be installed in Studio Four/TC4 at Television Centre in west London.  The desk will be configured identically to the 72-fader Vista 8 supplied to Studio One/TC1 in 2005, and is expected to be installed early in the new year.

Fittingly, the order represents a milestone for Studer's digital technology: this will be the 21st large-frame digital console to be delivered in the UK.  Marking the occasion, sales manager Andrew Hills reflects on the success Studer is enjoying in the UK's broadcast industry.

"This is one of those occasions where I'm delighted to see a BBC repeat!" says Hills.  "Choosing to use the same formula in another BBC television studio confirms that the Vista 8 was the correct choice for the prestigious and often complex productions in Studio One/TC1.

"As Studer consoles 'come of age' in the UK, it is worth noting that Studer's digital technology is making major inroads into television use, with a rising profile in studios and in OB vehicles.  This summer alone, Studer digital audio consoles have been used on the British Super Bike championships from Silverstone, the Ryder Cup golf from Dublin, and award-winning light entertainment such as the Strictly Come Dancing series and How Do You Solve a Problem Like Maria?, as well as many large-scale classical music broadcasts including the complete season of Prom concerts from the Royal Albert Hall."