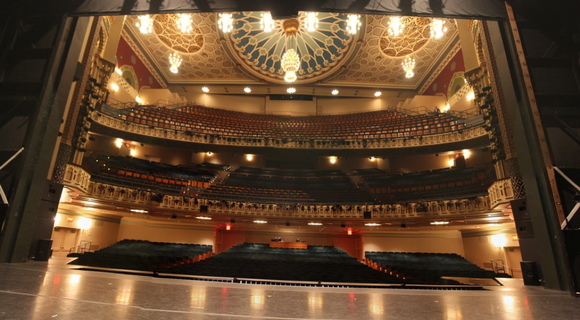 NEW YORK, New York – The New York City Center is one of the nation’s most renowned venues, host to the Alvin Ailey American Dance Theater, the American Ballet Theatre and a year-round program of concerts, theatrical performances and other events. Beginning in May 2010, the New York City Center embarked on a full-scale, $57 million renovation project that encompassed a complete redesign of the facility and the main auditorium, with a HARMAN Studer Vista 5 42-fader digital mixing console at the heart of the completely upgraded audio system.

“The auditorium was redone from the ground up—literally, as a new, sprung stage floor was installed,” said Augie J. Propersi, Audio Engineer at the New York City Theater, who did the audio system design in association with New York’s Scott Lehrer Sound Design. Ennead Architects LLP was contracted for the architectural design, with infrastructure consulting by performing arts facilities design specialists Auerbach Pollock Friedlander and acoustic consulting by Kirkegaard Associates.

“Because this was such a massive project and we needed to stay open for our resident company’s performance seasons, the work had to be done in two phases,” Propersi pointed out. “Phase one involved the construction of a new stage floor, new stage rigging and the construction of a new room to house the amplifiers. The majority of the work on the new audio system was done in phase two, including the construction of a new front of house area for the Studer Vista 5 console, the installation of all the speakers and audio/video electronics and the routing of all the cabling. In addition, we refurbished our lobbies, installed more comfortable seats, increased legroom and improved sightlines.”

“As you can imagine, an audio system of this caliber is remarkably complex,” Propersi noted. “We are running 496 inputs and 378 outputs including 136 mic pres, 40 line inputs and outputs, 48 AES ins and outs, 128 MADI ins and outs, 32 Ethersound inputs and outputs and 64 CobraNet ins and outs. The system is all-digital from the Studer Vista 5 out. The Vista 5’s massive I/O capacity is absolutely essential in this application, and in fact, the console can handle more than 1,700 total inputs and outputs so we have ample room for any future expansion.”

“All the audio system signal wiring is AES/EBU copper cable and we’re using the AES-24 standard for connecting the audio devices together from the Studer Vista to TiMax matrix to amplifiers,” Propersi continued. “Almost all of the audio components are connected digitally, although some of the older outboard processors and components are connected via analogue and we can patch in a TV truck via digital or analogue connection if necessary, for example. The Vista 5 works absolutely flawlessly in ‘talking to’ everything in the system.”

Another extremely useful function of the Vista 5 is its ability to be remotely controlled. Propersi uses laptop computers to control the mix at various remote locations throughout the theatre. “If we want to tweak the mix from the sound designer’s location or up in the balcony, we can do that via the laptops instead of having to communicate via walkie-talking to the front of house mixer,” Propersi said. “The laptops can physically move the console’s faders and other controls without interfering with the person mixing the show, via wireless communication with the Vista 5.”

Even more important than the Vista 5’s connectivity is its ease of use under the demanding conditions of live performance, Propersi said. “The console’s Vistonics™ touchscreen displays make it much easier to see what you’re doing and get access to key parameters quickly and without having to scroll through banks of menus,” he noted. “The Vista 5 has a lot of additional features that are specifically designed for live sound mixing, like the ability to gang and assign groups of inputs, automatic recall of previous mixes and cues and extensive surround sound functionality.”

“The Studer Vista 5 has proven to be the ideal console for the City Center,” Propersi concluded. “We’re running a world-class facility at the City Center and the Vista 5 is absolutely up to the task and then some.”