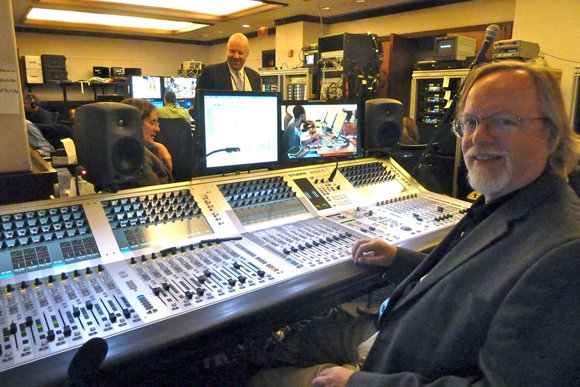 NEW YORK, New York - Front of house audio mixer Mac Kerr recently used HARMAN’s Studer Vista 5 digital console for the Clinton Global Initiative in New York City. Founded by President Bill Clinton, the Clinton Global Initiative included meetings between world and private sector leaders, chief executives of companies, and directors of major nonprofits in the hopes of making a positive change in the world. During the conference, attendees heard from inspiring speakers who shared their points of view on the world, and learned about creative approaches taken by major organizations in the hopes of sharing common insights and ideas and making connections with other members.

Kerr has been mixing the audio for the Clinton Global Initiative for several years. However, the event has grown significantly since its beginning and the time was right for a new console. “We chose the Vista 5 because it seemed to have everything we needed. It has been the perfect console for us and allows us to do the things we were never able to do before, as well as making everything else we needed easier and more straightforward,” Kerr stated. “There are enough inputs and outputs for us to do whatever we need. It was great to program in the extra spots without having to rebuild the core file, which would have been difficult.”

In all, there were six different venues feeding stems from the different briefing rooms. These had to be mixed with audience involvement taken into account as well. “It was a great advantage for us running everything on fiber, as it eliminated the electrical connection with a ton of background noise. All the sound systems connected together with remote racks in the venues, making it easy to troubleshoot with only one patch point,” Kerr explained.

“The Vista 5 made everyone’s job easier with so many outputs that were able to record all the venues and give all the channels as well as different languages. The interface between each venue and the central video village was perfect. We ran four wire convertors to each venue to communicate with the different rooms. It simply solved all the problems, even ones we weren’t anticipating. Overall it was a great experience and we could not have asked for a smoother event. It went so well that we are already looking forward to next year.”