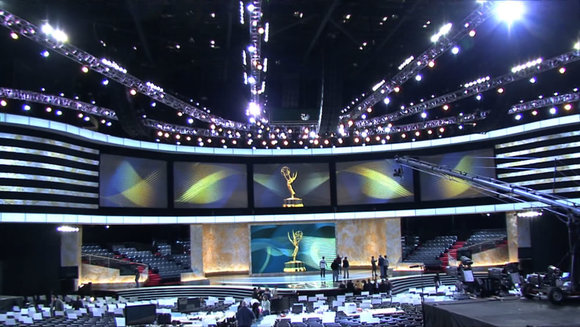 NORTHRIDGE, California - Based on its ability deliver a warm, transparent, and natural sound similar to that of an analog desk, Sweetwater Audio used the Studer Vista 8 console for the live broadcast of the 60th Annual EMMY® Awards telecast on Sunday, September 21 at the NOKIA Live Theater in Los Angeles, CA. Additionally, ATK/Audiotek deployed JBL VERTEC line arrays for the sound reinforcement system in the arena.

The EMMY Awards were broadcast live on ABC Television Network in 5.1 surround sound using the Studer Vista 8 console and JBL LSR4300 studio monitors. The team at Sweetwater operated out of their onsite truck to produce the type of quality sound that they had delivered at the Academy of Country Music Awards, the Democratic Convention, and the Video Music Awards pre- and post- shows.

“With the Studer Vista and the LSR monitors, I can say, in every case, when I have watched a recorded show it has sounded just as it had when I was doing the live show from the truck,” said Mark King, Production Mixer for the EMMY Awards.

According to King, delivering sound is more intense during a live broadcast, as opposed to a pre-recorded show. In between the inevitable time constraints and script changes, the sound team and mixing team both have to be able to adapt quickly. The design for the 60th Annual EMMY Awards was based on flexibility in order to make fast decisions at the push of a button.

In many cases, the production control room of an event, such as the EMMY Awards, was unable to hear the representation of a 5.1 mix. With the ability to improve this imperfection, the Vista and LSR monitors were able to feed the production control team a mono down-mix. “No matter where you stand in the NOKIA Theater, you can appreciate the sound mix,” said Dan Young, Audio EIC of Sweetwater.

Largely due to products like the Vista 8 the digital world continues to catch-up, creating the warmth and the natural sound of an analog desk.

“One of the very first things I noticed about the Vista is that it is a very transparent, warm, analog-sounding desk. Right off the bat, sonically, it was impressive,” said King. “Everybody’s concerned about the number of inputs on a console, but in television the number of outputs and how you are able to feed the world is also crucial. You need an accurate, unity-gain structure in a console to accomplish certain things, and this console fits this criteria.”

“The Studer support for this product has been fantastic. During every show that I have done out of this truck, a representative has been there to make sure that everything’s great,” said King. “You can’t say that for other companies.”

While the Sweetwater team worked the broadcast with the Vista 8 console and LSR studio monitors, ATK/Audiotek used JBL VerTec line arrays to produce the sound system for the live portion of the EMMY Awards.

“This company has used VerTec line arrays so much in the past, and we have so much faith in its ability to really control and direct sound. They allow us to do some really incredible things,” said Scott Harmala, CTO/Vice President, Engineering, ATK AudioTek.

Sound designer/mixer of the EMMY Awards, Pat Baltzell, was concerned with keeping energy off of wall and ceiling surfaces at the NOKIA Theater. “In a venue as large as the NOKIA Theater, we need multiple delay systems, as well as maintain sufficient gain before feedback,” Baltzell added. “Keeping the broadcast sounding intimate, although the reverse camera shots reveal a large venue, is crucial.”

According to Baltzell, VERTEC line arrays offer several advantages. “There are good line arrays, but the JBL product gets more sound pressure level per cabinet than its competitors,” he said. “The system is also much lighter than competitive products. Often times in a television project there is quite a bit of equipment hung, such as four or five hundred moving lights. All of that adds up to weight, and having a sound system that can contribute less weight to the overall picture is an advantage.”

Studer and JBL are units of Harman International Industries, Incorporated (www.harman.com). Harman International designs, manufactures and markets a wide range of audio and infotainment products for the automotive, consumer and professional markets, and maintains a strong presence in the Americas, Europe and Asia, employing more than 11,000 people worldwide.