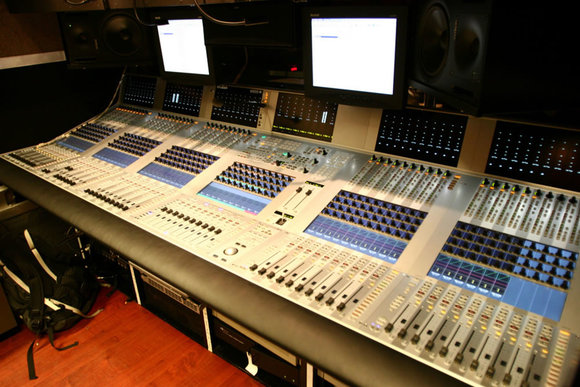 At over eight feet wide, AMV’s new console is also the largest Vista 8 ever assembled by the manufacturer, comprising 50 input faders, a 10-fader master section and remote 10-fader input bay, in addition to an extensive outboard Studer DSP rack. The frame was customized to fit within the tight confines of the truck by Boulevard Body Works of Warren, New Jersey. Thanks to the new desk, Celebrity is now easily able to handle even the most demanding surround sound broadcast and recording requirements.

According to AMV Director of Mobile Operations Lee Blanco, who is stationed at the company’s vehicle depot in Lodi, New Jersey, the Vista 8’s comprehensive redundancy was a primary reason for selecting the console. “Our desk has a fully redundant control system with all current console settings mirrored from the primary system, which means that in the unlikely event of a control system problem, we can switch to the backup system and transparently restore to the most recent desk settings. Seeing that Celebrity is frequently used for live broadcasts, this capability was vital in ensuring uninterrupted operation and gave us guaranteed peace of mind.

“We also greatly appreciate the functionality of the board; it’s very versatile and the unique Vistonics interface makes operation extremely intuitive. High-end digital desks often have a reputation for being a bit daunting, but we’ve had a number of freelance engineers sit down with the Studer and they’ve all walked away very happy and confident in their ability to use it simply because it is so user-friendly.”

AMV President Eric Duke considers the Vista 8 key in his company’s initiative to keep Celebrity firmly on the forefront of digital technologies. “Our new Studer desk is certainly the centerpiece of our recent upgrade and allows Celebrity to deliver a sonic performance that surpasses the specifications of most trucks dedicated solely to audio,” he says. “In the short time that we’ve had the console, we’ve already used it on a PBS taping of The American Ballet Theatre production of Swan Lake at the Kennedy Center, a live broadcast of Birth Day Live! for Discovery Health Channel and season tapings for Showtime At The Apollo, and it performed superbly at each location. Combined with our new HD upgrades, Celebrity is once again the premier entertainment digital production mobile unit.”

During the retrofit, Celebrity was also equipped with new Sony HDC950 and HDC900 cameras allowing the unit to capture images natively at 1080/60i, 1080/24p, 1080/25p and 1080/30p resolutions to new high definition HDW-F500 VTRs as well as standard definition serial digital to DigitalBetacam. New monitors, routers and converters were also integrated to bring the truck up to full HD spec. Designed for total digital signal flow and 16-camera capacity, Celebrity possesses the power, efficiency, flexibility and reliability to cover even the most elaborate entertainment and sporting events.