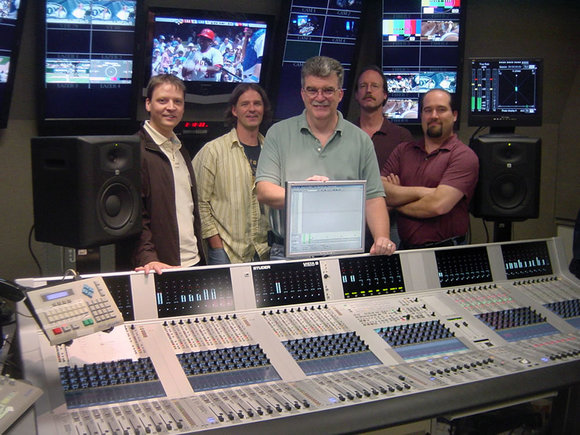 LOS ANGELES - May 2006 -- In preparation for this year’s Major League Baseball (MLB) and subsequent National Football League (NFL) season coverage, FOX Networks Engineering and Operations in Los Angeles is currently in the process of completely upgrading the audio facilities of its two primary production stages used for FOX Sports.

The first phase of this project has been to install a 96-input Studer Vista 8 digital live production console into FOX Network Center Stage A, which, beginning with baseball’s official opening day on May 20, now hosts all of the network’s pre- and post-game coverage, including the Emmy Award-winning MLB on FOX Pregame Show hosted by Jeanne Zelasko with analyst Kevin Kennedy.

The project’s second phase, planned for the third quarter of this year, will upgrade Stage B with another Vista 8 for FOX Sports’ enormously popular talk show Best Damn Sports Show Period.

The two Studer desks are being installed as part of an initiative to fully overhaul Stage A and B’s audio control suites, which previously utilized older analog mixing consoles. Upon completion, both suites and stages will carry a fully digital audio and video spec.

According to FOX Networks Engineering and Operations (NE&O) Vice President Chris Bauer, the decision to utilize the Vista 8 was serendipitous. “Right about the time that we were initially starting to look around at digital consoles, Jamie Dunn of Studer USA had rather coincidentally contacted Jim Hopkins, our senior VP, to see if he could demo the Vista 8 for us; it was a case of good timing,” recalls Bauer. “So Jamie came in, showed us the desk, and we were impressed with its design and construction.”

Curious as to what other Vista 8 owners thought about their consoles, the NE&O team quickly put in a few calls to several users, including the British Broadcasting Corporation and NYC’s Chelsea Television Studios/All Mobile Video, both of which have multiple Vista 8s. “The comments back were very favorable, not only regarding the quality of the board, but Studer’s service and support as well.”

Equally important, however, was the approval of the freelance audio mixing community seeing that independent broadcast engineers would be manning the desk. “A number of freelance mixers sat in on a few of the meetings where we discussed the Vista 8 and their comments were that they had personally used the desk and really liked it – particularly the Vistonics™ interface, which makes it easy to use. Knowing that this desk was embraced by that community assured us that it would a good choice in helping us smoothly transition from analog to digital.”

The FOX NE&O team also knew it wanted a 5.1-capable desk that could easily accommodate the switch to surround sound when the time came, and the Vista 8 more than adequately offered that provision. Other attractive key features cited included the desk’s robust redundancy capabilities and high-quality onboard DSP, which eliminated the need for extensive outboard processing gear.

Now that the first desk has been commissioned and officially deployed for the season opener, Bauer reports on his satisfaction with Studer thus far. “True to what I heard from other Studer users, the service and support I’ve received from Studer USA and the factory in Switzerland has been very good. Todd Pekala, our director of systems engineering, and John Holt, our senior systems engineer, designed our new audio suites around the Vista 8, so they’ve been working very closely with the company in terms of how things should be configured and installed. And they, too, have found Studer to be very responsive to their questions and highly attentive to their needs. Needless to say, we’re all very happy.”