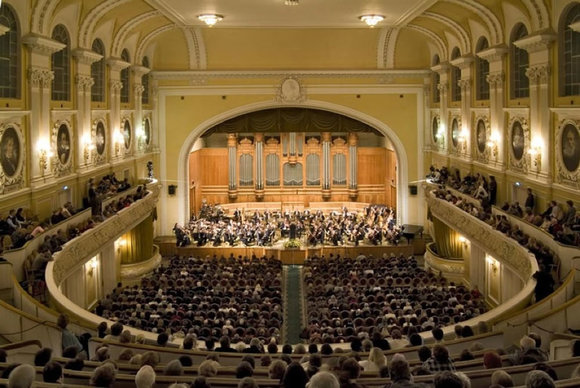 MOSCOW, Russia – As part of its current restoration, the Moscow Conservatory has purchased a Studer Vista 9 digital console for recording, post-production and broadcast from its Great Hall, as well as a Soundcraft Vi1 digital console for multipurpose use, including at front of house when required.

The Moscow Conservatory was founded in 1866 by famous Russian musician Nikolai Rubinstein. It has established itself as one of the world’s most renowned institutions of musical education. In 1940, it was named after the great Russian composer Pyotr Tchaikovsky.

The Great Hall of the Moscow Conservatory opened in April 1901. It has been admired by artists and performers all over the world for its remarkable acoustics and elegant architecture. The famous pipe organ of the Great Hall was built by a legendary Paris organ builder A. Cavaille-Coll and was recognized at the Paris World Exhibition of 1900 as one of the best organs in the world--the organ has never been changed since that time. With a seating capacity of 1,737, the Great Hall has hosted the world’s finest orchestras, ensembles and soloists, as well as international festivals and competitions including the prestigious Tchaikovsky Competition for young musicians.

The Moscow Conservatory purchased a 42-fader Vista 9 console that will be utilized for recording, post-production and direct transmissions. It will also have a connection position for OB vans. Building on the successful Vista platform, the Vista 9 takes the operator experience to a higher level, supplementing the popular Vistonics™ interface with radical and innovative TFT-based metering, FaderGlow™ and numerous other innovations. The new metering gives precision feedback on signal status, displaying mono — right through to 7.1 — signals in the upper section of the screen, while the lower portion can show bus assignment or for surround channels an image of the surround composite, providing a clear and easily understandable display of the surround signal and an innovative History mode where each channel’s recent behaviour can be displayed for up to 30 seconds.

Alexey Pogarsky, sound engineer from the Studio of Moscow Conservatory, explains why they chose the Vista 9 and Vi1: “For over 40 years both for Soviet and Russian sound engineers, the word ‘Studer’ has been a symbol of robust equipment with the highest sound quality, working flexibility & excellent design. The Conservatory has had A80 & A810 tape machines & also an A962 mixer by Studer. It has always been a pleasure to work with them. This equipment is still used today and we still use some of it quite extensively!

“Before we chose the Vista 9, we also looked into some other widely known digital and analog consoles. And as a result we found that Vista 9 is the best option. It is very important for our work to have high-quality microphone inputs with great Studer transformers. The analog split out for each input, just in the mic preamp alone, is a very useful thing too as we are going to work with DSD and high sample rates. The working process with the famous Vistonics interface is very similar to an analog mixer. The Vistonics interface and high sound quality were the most important reasons for choosing the Soundcraft Vi1. Now we will have a unified working interface and great sound quality for multipurpose use.”

“We are honored that the Moscow Conservatory has chosen Studer and Soundcraft consoles as key components of the Great Hall’s restoration,” said Jarle Felin, Studer Sales Director. ”The decision was based on a rigorous specification and evaluation process that lasted for a substantial time, so we are especially gratified that the Vista 9 and Vi1 were determined to be the best consoles for their requirements.”

The consoles were sold through Audio Solutions, the systems integrator of the Moscow Conservatory project. Sergey Dolgov, head of the audio department of Audio Solutions, adds: “We consider it a great honor to be a partner of Studer in Russia as Vista is really the best digital mixing system in the world for musical studios, broadcast and live shows at any level by ratio of quality/reliability/price. Having installed many Vista systems, we have been pleasantly surprised by the highest stability of work Studer consoles offer, even when being used 24/7/365. I often can hear from our customers that operating a Studer console is as easy as operating an analog console. With all this flexibility and almost boundless opportunities, the Vista system can solve any challenge.”