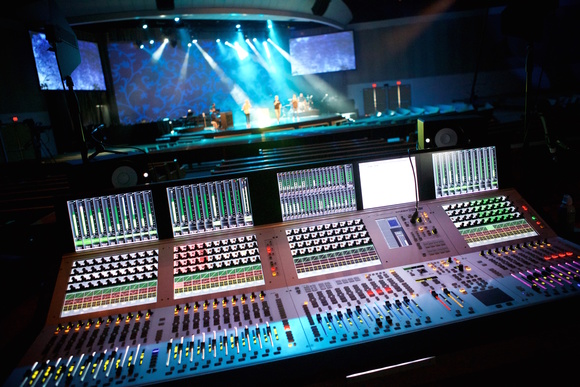 SUGAR LAND, Texas – With just under 10,000 members and two campuses with more on the way, Sugar Creek Baptist Church in Sugar Land, Texas is one of the largest houses of worship in the United States. Looking to upgrade its front-of-house audio console to accommodate the services in its main sanctuary, the church recently added a HARMAN Studer Vista V 42-fader digital mixing console.

Sugar Creek Baptist Church recently celebrated its 40th anniversary and is more popular than ever, thanks in large part to its ability to provide different kinds of services for different tastes. Every Sunday, the church holds three services. “The first service is more traditional with a choir and orchestra, the second service is a more modern, blended service with a choir, and the third service is very modern and band-driven, with a huge lighting and audio system,” said Matt Rhodes, Director of Technical Production for Sugar Creek Baptist Church. “These services typically host anywhere from 1,000 to 2,000 people, and there are only 12 minutes between services, so they require very quick transitions.”

In addition to speed, Rhodes and his team had some very specific requirements. “We needed a very high I/O count and needed the ability to mix more than 120 channels at a time,” he said. “With those requirements, it really puts you into a higher class of console.”

“[Lakewood Church’s Head of Audio Production] Brad Duryea is a good friend, and his team had just received their Vista X consoles. We took a look at it and thought it was just incredible,” Rhodes said. “One of the top requirements of our new console was redundancy, and we saw that Studer offers complete redundancy.”

Sugar Creek purchased a Studer Vista V digital console, which is based on the same Infinity Core processing as the Vista X, but in a smaller chassis. Sugar Creek’s Vista V comes equipped with two 400-channel Infinity Core engines, along with three D23m I/O systems. “We have a mix of analog and AES I/O at FOH along with eight MADI cards and we just received our DANTE card, so we’re going to start integrating a lot of our playback on the DANTE network,” Rhodes added.

According to Rhodes, the extensive features offered by the Vista V further separated it from other competitive consoles. “I think there’s a stigma here in the US that Studer consoles are expensive, but when you dig down into the features and the total cost of ownership, they really aren’t at all,” he noted. “I also have to say that our whole experience from a service standpoint has been better than I’ve ever experienced. The board is very different from any other console out there and the Studer team has been there to support us every step of the way. That adds a tremendous amount of value to our purchase.”

But it’s not just the technical staff that has noticed the improvements in audio quality. “People at the church who didn’t even know we changed consoles have commented on how great the system sounds,” Rhodes said. “When non-professionals are commenting on the audio quality, you know there is a huge difference.”