The Force Is With Studer For Star Wars: In Concert 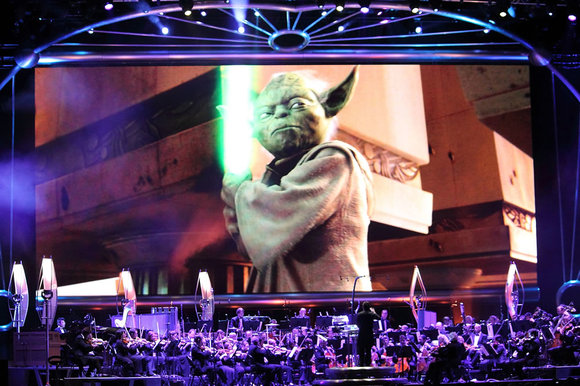 POTTERS BAR, United Kingdom – The world’s greatest entertainment franchise in history is currently on the road with the world’s most advanced digital live sound mixing console, the Studer Vista 5 SR. Star Wars: In Concert combines John Williams’ unforgettable film score, performed by a live symphony orchestra and chorus, with specially edited footage from the six Star Wars films. Through each musical piece, audiences experience the key themes, characters and story elements of the epic Star Wars saga from an entirely new perspective. To assure the experience will be as intense and immersive as the films themselves, sound for Star Wars: In Concert is mixed using the Studer Vista 5 SR digital live mixing console featuring the award-winning Vistonics™ user interface. The Vista 5 SR is handling 110 inputs per night for a massive symphony orchestra playing beneath a gigantic 60 x 30-foot high-definition projection screen. In the words of Steve Colby, the FOH mixer for the touring show, “Everything about this production is big, and the Vista 5 SR has not skipped a beat.”

Colby, who has been the primary FOH mixer for the renowned Boston Pops Orchestra for over 30 years and who is often called upon for his expertise with symphonic ensembles in very large venues, was introduced to the Studer Vista 5 SR for this project by Fred Vogler, Sound Designer for Star Wars: In Concert. Colby is very happy with the introduction. “The console sounds terrific, very clean and musical,” he says. “We’re at 100 inputs at 96 kHz and the DSP can handle it with no trouble at all.” Colby has quickly become a fan of the Vista 5 SR’s Vistonics touchscreen technology. “The Vistonicsuser interface is really powerful,” he says. “It’s really nice having soft encoders embedded within the screen.”

The Vista 5 SR is the hub of a complex live sound-for-picture production and a sound system provided by Montreal-based Solotech and operated by Systems Technician Patou. The console is working in conjunction with a Rosendahl Nanosyncs HD Multi Standard Sync Engine that locks PAL, NTSC or slow PAL, progressive or interlaced HD video and digital audio reference signals together in any required combination, producing a perfectly synchronized and powerful AV performance. “We’re also using a Lexicon 960L digital reverb as outboard, but otherwise, the Vista console is doing the lion’s share of the work, and it’s doing it extremely well,” Colby says. “It’s a great console and I’m planning on looking into using one with the Pops in the future.”

The compact Studer Vista 5 SR digital mixing console is a road-ready version of Studer's famous Vista 5 console and combines award-winning Vistonics-based technology with a highly cost-effective price. The Vista 5 SR comes with preset configurations for front-of-house and monitor use. A stand-alone Config Editor tool allows the channel/bus structure to be customized, all of which can be saved for each particular show setup and instantly recalled from memory or a USB stick at a later date. The expandable I/O system allows the entire range of available Studer D21m Series I/O cards (including CobraNet and Aviom A-Net) to be added to the system. The MADI standard is used as optical snake link from stagebox to FOH rack, with the possibility to add a redundant snake for increased security. The Vista 5 SR also comes with numerous facilities to aid production, including Studer’s proprietary VSP panning system, which can be used to great effect to control panning without level shifts.