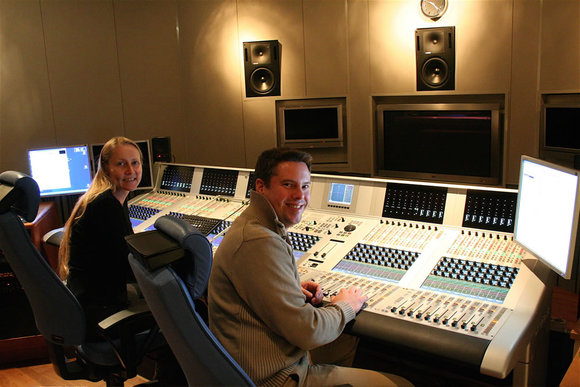 In Sweden, state broadcaster Sveriges Television AB (SVT) has taken delivery of its fifth Studer Vista 8 digital audio mixing console, which has been installed in SVT’s flagship live-audience Studio 1 in Stockholm where it is being used on the nation’s most popular light entertainment shows.

SVT is a long-time advocate of the Vista Series technology, having purchased its first two Vista 8 consoles in 2005: two more consoles were installed into SVT’s regional facilities in Gothenburg and Umeå last year, supplied by distributor MixRommet. Although the corporation is keen to maintain a variety of proprietary mixing platforms, when the time came to upgrade the audio facilities in the prestigious Studio 1, after a long evaluation process the team of sound supervisors once again voted in favour of a 52-fader Vista 8 desk.

The 1,000 sq.m. Studio 1 handles SVT’s biggest productions, often with a live studio audience. Like many other European state-owned broadcasters, SVT is free to sell its production capabilities to other programme makers on the open market, and thus Studio 1 has been used to make Sweden's most popular light entertainment show 'Let's Dance' for Mastiff Productions, aired on the commercial TV4 channel.

Because Studio 1 hosts the major musical productions, such as Junior Eurovision and ‘Let’s Dance’, audio quality is a high priority. Some of SVT’s sound supervisors were seeking a particular type of sound, what might be called “the Swedish sound”, punchy and ‘phat’, drawing on the country’s rich tradition of studio recording as well as big pop-rock culture. SVT’s initial feedback to Studer turned into a high-level international evaluation when SVT’s counterparts from the BBC joined in the debate.

Impressive collaboration between Swiss, Swedish and British audio engineers has resulted in a new compressor algorithm, which will now be made available on all new Vista 8 consoles. The creation of the Vintage Dynamics algorithm gives users a retro style of compressor-gate/expander to give a more pronounced effect than the standard dynamics, which have long been acclaimed for their transparency. The Compressor section of the ‘Vintage Dynamics’ is flexible enough to permit different types of sound colouration, and can be used to produce quite extreme effects. Compressor settings include soft-knee width and peak or rms detection to allow the compressor to be set-up to cater for a wide range of tastes. Another very special function is the ‘wet/dry’ blending control, which opens up a whole range of new possibilities. For example, “parallel compression” or “upward compression” is available without the need for any complicated or extensive routing and also without the need for delay compensation.

SVT’s lengthy evaluation of the Vista 8 console’s credentials, supported by steady service since 2005, produced a healthy breadth of opinion resulting in a winning consensus. The Vista 8’s scalable solution, which means a small configuration can easily become a large one, is matched by its future-proof design; features can be added without necessitating a change of hardware, as demonstrated by the arrival of the new 5.1 surround sound channels.

Gunnar Johansson, the Technical Planning project manager, and his team highlighted the value of Studer’s Vistonics™ interface; “its ease-of-use is especially important when you expect freelance engineers to get to grips with the console in a very short time. Vista 8 can easily accommodate two operators, which is much better than those desks which have a central bay and there’s always a war going on!” The Vista 8’s ability to provide a mix automation system for post-production as well as being able to run a live show was another persuasive factor, appealing to the specific needs of SVT’s Studio 1.