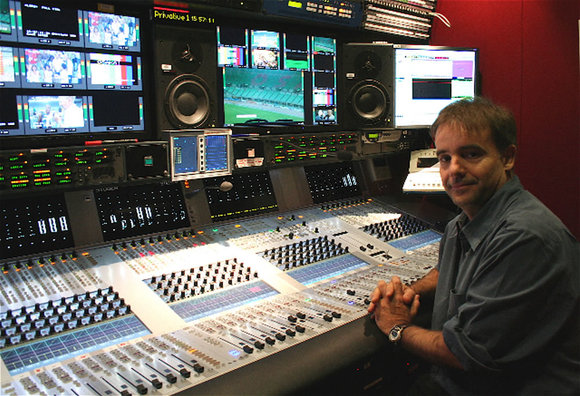 Identical Studer Vista 8 consoles have been specified for 'The Benjamins', two new HD OB vehicles commissioned by France 3, the second largest French public television network and part of the France Télévisions group. The first of the two trucks is already on the road, operating out of France 3 Marseille Région, and its twin is expected to be delivered at the end of the year, assigned to France 3 Rennes.

The OBVs are mid-size additions to the FR3 fleet; 12 metres long, fully expandable to 4 metres wide, and carrying up to 12x HD cameras. Particular emphasis was given to the on-board audio control room, featuring a 52-fader Studer Vista 8 digital console, which is surrounded by more than a tonne of acoustic insulation material.

The Vista 8 has SDI inputs and Dolby E decoder, and 11x D21 racks of I/O. It uses the new SCore Live DSP, and is similar in specification to those Vista 6 desks installed in 2004 in 'the Twins' OB trucks, also part of the France 3 fleet. There are two Studer Stageboxes (each with 32 mic inputs, plus another 20 locally available on the truck), and it was this feature that proved conclusive in FR3's choice of console.

"We cover a lot of football matches where the Stagebox has to be carried long distances," explains sound engineer Christian Mouttet. "We preferred the size and weight of the Stagebox, and its more efficient cooling systems." Mouttet also points out that France 3's existing confidence in Studer was boosted by the company’s ability to meet the OB’s delivery deadlines.

The OBV was built in just 8 months, although a more usual timescale is 14 months. The truck had just one week of testing, and the engineers just one week of training, before they were sent to cover the French Open tennis championships at Roland Garros Stadium. "People have less time to learn the equipment than in past years, even though it is getting more complex, " points out Jean-Philippe Blanchard from Audiopole, Studer's French distributor. "Fortunately the Vista 8 has a significantly quicker learning curve than other digital consoles."

This year's championship was the first to be carried in HD with Dolby E encoding. “We had very good support from Audiopole,” says Christian Mouttet, “and, for us, it was quite easy to switch to the Vista from an analogue console, the interface is very intuitive.” FR3 operations managers have already expressed a wish to see a greater exchange of engineers between the different OBVs in the fleet, and having Vista Series digital consoles in four out of their 6 vehicles will facilitate this.

The France 3 ‘Benjamins’ are expected to cover a wide variety of classical music, dance and theatre events in HD. Even though transmissions are likely to continue in SD for the near future, productions will be completed in HD giving France 3 the opportunity to exploit DVD sales at a later date.