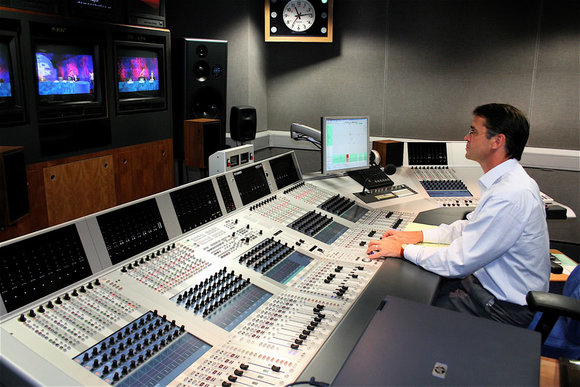 This summer, two Studer Vista 8 digital audio consoles have been installed at BBC Television Centre in west London. BBC Studios, part of BBC Resources Ltd, ordered the desks for Studio Six and Studio Four, following the positive response to the installation of a 72-fader wraparound Vista 8 into BBC Studios’ flagship Studio One two years ago.

Studio Six was the first studio to go on-air with its new Vista 8, having completed a console-only refit in the impressively short time-frame of five days. By contrast, in Studio Four, the Vista desk is being incorporated into a new infrastructure. When the refurbishment of TC4 is finished in September, the Studer Vista 8 audio production format will be the most widely used at BBC Studios Television Centre.

In Studio Six, the console will be used on a raft of production genres, from light entertainment and comedy to sit-coms. The distinctive user-friendly ergonomics of the Vista 8 have already proved to be very popular amongst the independent production companies such as Talkback and Angst Productions which regularly use Studio Six.

The two Vista 8 consoles are very similar in scale, featuring approximately 500 inputs in a 72-fader and a 62-fader wraparound layouts. The smaller of the two desks, in Studio Six, is fully wired, so can be easily expanded at a future date by the addition of more DSP.

Although the BBC Resources team evaluated all the alternatives in the digital broadcast console market, the Vista 8 was still judged to be head-and-shoulders above the competition, and offered other very significant advantages to the broadcaster, such as the engineers’ existing familiarity with the operational design.

BBC Studios chose the Vista 8 following a thorough evaluation and selection process. As Studer’s UK sales manager Andrew Hills points out, “working on a Studer Vista 8, with its patented Vistonics™ interface, is a different way of working; once engineers get to grips with it, they love using it. With 3 Vista consoles at Television Centre, it will be easier for BBC Studios to train more engineers in the use of the format.”