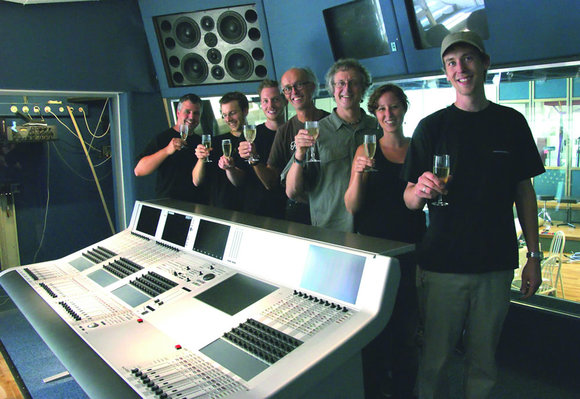 Located in the historic buildings of a former spinning mill on the banks of the river Töss in Winterthur, one of the largest and most renowned recording studios in Switzerland has its premises. Three fully equipped control rooms and studios, a minivan for mobile recordings, the HardMobil, and many other facilities have been used for productions with artists such as Züri West, Francine Jordi, Pepe Lienhard and the finalists of the Swiss TV production “Musicstars”, who have been regular visitors to the studios.

Another star that has now made itself at home in Studio A is a STUDER Vista 8 console.

In 2006 a Vista 5 console was installed in the mobile minivan, and has shown excellent results ever since. So another powerful Vista was the logical choice for installation in the largest studio. The Vistonics™ user concept, ergonomics, comfort, reliability and quality had been convincing factors from the start.

The new console arrived in Winterthur at the end of August and was  used for the first recording on September 4th after a short test phase.

“The results are brilliant”, so sound engineers and owners Ron Kurz and Moritz Wetter reported unanimously: “It’s a pleasure working with the Vista 8. Not to mention the new possibilities resulting from the compatibility of the mobile Vista 5 and the installed Vista 8. With such a start, the future looks bright for more stars to come to the Hardstudios for their recordings, and their accompanying sound engineers will be just as enthusiastic.”

But there’s one more thing: The Hardstudios celebrated their 20th anniversary at the same time as the new console arrived. We would like to congratulate them on this occasion and hope the new equipment will prove a solid basis for many more years of success.

Hardstudios1 : The new Vista 8 arriving at the Hardstudios in Winterthur.

Hardstudios2 : The team of the Hardstudios and their new production console Vista 8.

Hardstudios3 : The owners Moritz Wetter and Ron Kurz with a cake in Vista-shape at the festivities for the 20th anniversary of the Hardstudios.