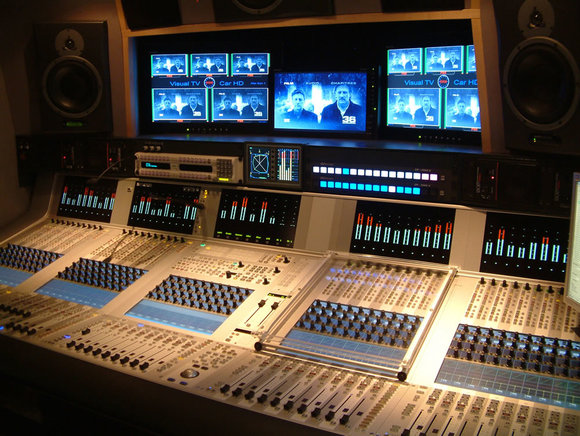 The first of its kind in France, Visual 102’s latest addition to its outside broadcast fleet is now on the road, offering High Definition vision and all-digital audio facilities.  HD1, an expandable 24-camera truck, is the twelfth and the largest vehicle to be commissioned by the Paris-based company, capable of working simultaneously in high definition and standard definition formats, and in all digital audio formats.

Visual 102 is the first OB operator in France to select the 52-fader Studer Vista 8 digital audio production mixer, supplied by Audiopole, although other leading OB companies are already using Vista 6 and 7 models.  It was the obvious choice for a high-specification OBV which is aimed at the French events market, particularly theatre and music events, as well as large sporting occasions.

HD1's audio specification was drawn up by Pierre Barbier, Visual 102’s audio manager, who has long experience with Studer’s analogue consoles.  One of the main factors to influence him, apart from Studer’s distinguished reputation, was the Vistonics operating system, which enables any engineer to become operational on the desk in a very short time.  “Any newcomer, with a little help from a technical operator, can use the Vista 8, which is not the case with some of the other consoles we could have chosen,” says Barbier.

His words are echoed by sound engineer Ludovic Riva, who is operating a large-format digital console for the first time.  "The software is very intuitive and very quick, and, after just four events, I'm already feeling very comfortable working with this desk.  It will change the way I work, encouraging the use of the digital facilities like snapshots, but I think the Vista is just perfect for audio, it is the best desk for our job.”

HD1 made its debut on a high-profile live broadcast from L’Opera de Garnier, which made full use of the Vista 8’s 52-fader capability, and will be broadcasting World Cup 2006 from Germany.  However, as Pierre Barbier explains, “on a big talk show,with a minimum of 20 mics, and with VTR, sound FX, music and perhaps a live band, you can very quickly use up 40 faders.  For the projects we intend to do with HD1, we needed at least 40 faders on direct access.”